April 27  Faxe Friday is always fun, but yesterday was an especially good time.

I named the weekly get-together after my favourite beer, Faxe Amber from Denmark. Cheap and tasty. In warm weather, we sit on the porch, tell lies and laugh. Cold weather usually finds us in my office. The light is lovely in the afternoon and evening.

At first, it was just a few beers or beverage of choice, then off to home. A few months back I decided to put on a meal (venison chili burritos if I recall). After several more weeks of Faxe & Food Friday, guests started to alternate bringing food.

Last night John & Robin kindly brought salad and chicken wings. They also brought an air fryer, my first experience with one of those excellent devices. Due to the limited capacity, we had time between batches of wings to nibble and talk. We feasted for well over an hour, experimenting with different methods and timing of the sauce application etc.

It was a wonderful time with good conversation. There is much to be said about slow eating, and that very conversation came up. We spoke about the fracturing of family life and conversation around the table. How some people don’t even eat in the same room- grab a plateful and disappear to their private den where they no doubt stare at screens and eat mindlessly, barely acknowledging the taste of the food. Strictly fuel for more gaming energy?

Regardless, we are doing our part to restore the tradition of good food and conversation. Faxe, food and friends- life is good.

Side note: I nominate Faxe for the best graphics in the beer label world.

April 19  Seinfeld moment? Perhaps worthy as a topic for that wonderful show of the past: why do Chapsticks in my pocket screw the contents out into the lid, never the opposite?

That messy occurrence happens more often than chance should dictate. I have tried carrying the tube upside-down in my pocket to see if it screwed itself into the container, not the lid. No joy, same results.

Where’s Einstein when I need him? My mind certainly takes some weird paths, dwelling on trivia like that.

I’m in the process of gathering song lyrics that I wish I’d written. I will publish samples when I have more. If you have a favourite line or two, send to me and I will include your choice.

Here’s a sample that I find particularly delightful:

“After all the jacks are in their boxes
And the clowns have all gone to bed
You can hear happiness staggering on down the street, footprints dressed in red.”

The darkroom was my refuge, a quiet, softly-lit workshop. Developing film could be both anxious and exhilarating. Gently rocking (agitating) the film cans at precise intervals, wondering about the images. There was no instant digital gratification.

Film hung to dry and later contact printed to see small images. A days work. Then edit the images. The next step is the best.

Seeing an image appear on paper in the developer is a wonderful experience.

Variable contrast paper was my choice. Filters of various colours were used to increase or decrease contrast. I even changed contrast within a print. Perhaps a #3 filter overall, # 5 to boost a flat section and a #1 or 2 to gain detail in contrasty areas.

Proof and test prints were done on a resin-coated paper for fast wash and drying times. Exhibition grade prints were printed on Kodak Fine Art paper. It might take a week for me to print two negatives. The prints had “dry down” darkening that had to be accounted for, and they had to dry overnight on screens. The next day I would inspect the print and make notes of how to improve it, often with a marker drawing right on the paper. The proofs were torn up after I was satisfied with the final image. I made up to ten prints per image.

The shift to digital saddened me. I felt that my 45 years of printing experience was now useless. Then Erwin Loewen said to me, “David, your darkroom is the computer now.” He was correct- Photoshop even has the same “tools” including dodge/burn, contrast and characteristic curves, plus a whole lot of things I will never use.

My darkroom experience has evolved. I realized that I have a huge advantage knowing how to coax the best from scanning and adjusting/ optimizing an image on a computer. Still, on rainy days like today, I miss the warm cocoon of that softly-lit darkroom.

April 13  More photos from the archive. During the ’80s I photographed, amongst other subjects, local band promotional material.

While sorting through another box of prints I found this photo that I like for the hilarity it captured. I think the neg might be sharper- this is from a proof print. 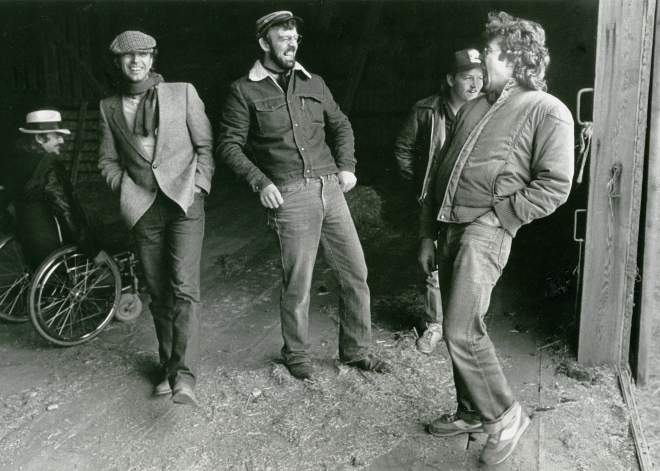 The photo was taken in the hayloft of a barn, the same “studio” for the photo of Bruce Shaver in multi-image karate moves. I also used the same location for some product shots. Large doors on the east and west side allowed some control of the available light.

Available light was all I had for the first twenty years of my work. The weather, the time of day and the season were all factors to deal with, but I loathed flash photography.

Also found this quirky print of rodeo riders- I will add it with the others. I saw it as a two-headed man. And, judging by the white hats, a good guy(s) too. 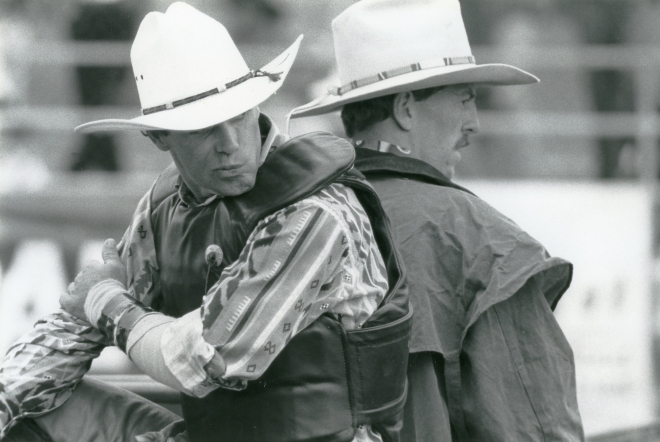 April 5  I determined from the start that I would avoid two topics here at ECW: politics and religion. I want to keep this an upbeat, fun and thoughtful site to visit.

The interweb is a crazy place at times. It is nearly impossible to avoid those two poisonous topics when perusing the news. The comments are often toxic. Social media has become a shouting war.

Instead of trying to find common ground and therefore make some progress, so-called leaders have embraced the tactic of divide and destroy, turning citizens against one another.

So much anger in the world these days, everybody polarized into separate camps, lobbing insults at the other side. And then there are the usual bores who make everything about politics. I swear that if there were a piece on the making of hockey pucks they would be screaming about “lefties” and “cons.”

Fed up with the crap? You can always find sanctuary at Ever Clever Wilson. I’ll even throw in a joke now and then.

“The human race has one really effective weapon, and that is laughter.”  –Mark Twain