Dec 2  The ongoing fish tug project has opened areas of interest. The captains and crew have been very receptive to questions and willing to talk about their work and lives. Their usual challenge of finding fish is compounded by warming waters and cooling relations with the sportfishing people.

There seems to be a lot of antagonism towards commercial fishermen, “they’re taking all the fish, perch are disappearing” is a common thread on the interweb. Nasty acts like net-cutting have occurred. Aquatic road rage, mindless and expensive loss.

The facts are that perch numbers are cyclical and are also currently threatened by an abundance of prey fish- pickerel and trout. Trout are stocked in locations all over the Great Lakes by sportfishing groups.

The lake waters are warming, another challenge for commercial fishing. Fish have comfort zones. An overnight catch of hard to find perch was spoiled due to the 2 degrees warmer water and was refused by the fishery. That hurts.

Last week in Goderich a crewman told me that they were finally catching whitefish. Nobody gets paid if the fish aren’t caught. The whitefish were netted 150 feet deep. Normally they’d be around 90 feet or so. Warming waters again.

Those same waters are frigid now, and the men on fishing tugs still go to work, braving the weather and chance. The chance that they’ll return safely with fish to pay the bills. Not a good vocation for the timid.

Nov 27   The hunt for Hurley fish tugs led to ports at Bayfield and Goderich this week.

We were looking for the Last Time and the Mike J. Both Hurley builds were reportedly fishing out of Goderich, working the unforgiving, cruel late season in a tough effort to squeeze a living wage from the cold waters.

It cannot be an easy life. I was cold while waiting for their return to harbour, sheltered from the wild weather that fishing boats sometimes face. Life-threatening situations with nowhere to run. 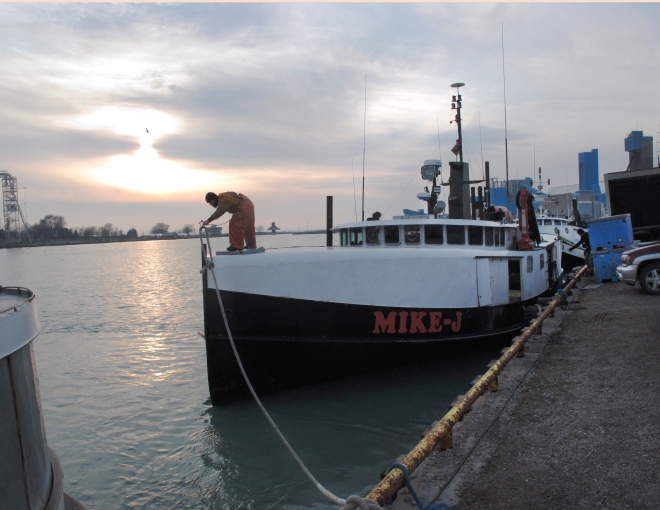 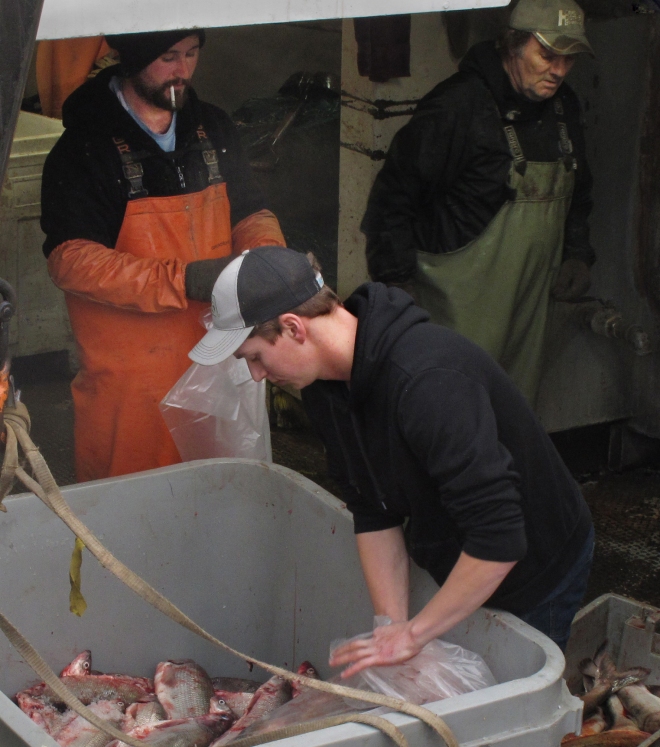 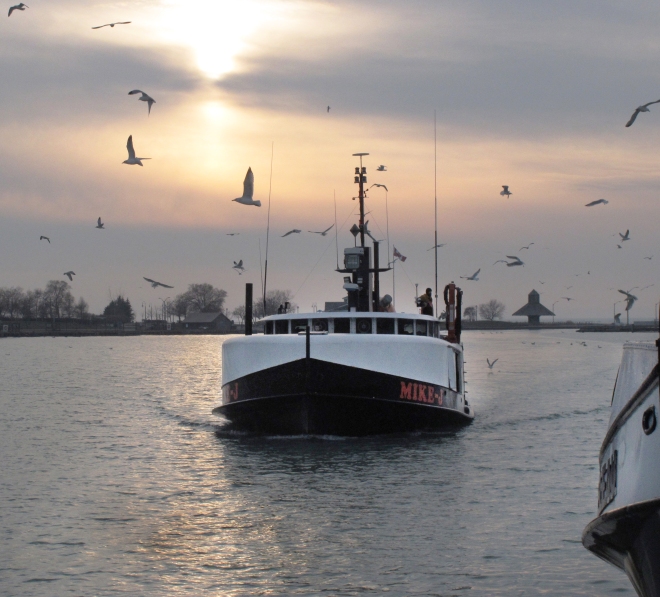 The Mike J returning to Goderich 2019

The Last Time was the last and the largest fishing tug built by Ralph Hurley in 1980. The length is 80 feet and the beam is a generous 24.5 feet wide. Two cars were taken aboard for the maiden voyage to her new home at Mamainse Harbour, Lake Superior.

I am working with John Hurley on an extensive search of the archives documenting the entire build process. The results are to be posted weekly on the Facebook site Great Lakes Fish Tugs. You can follow the project there, a new post will be added every Friday until completion. 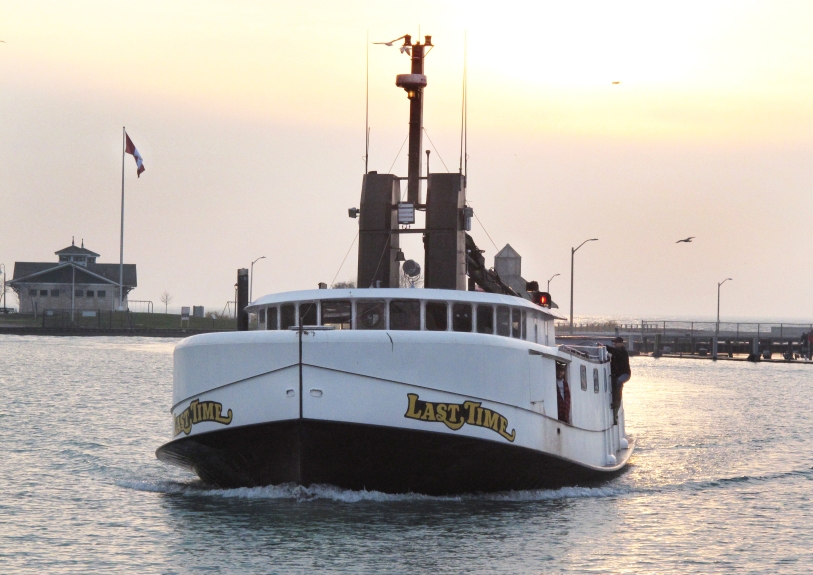 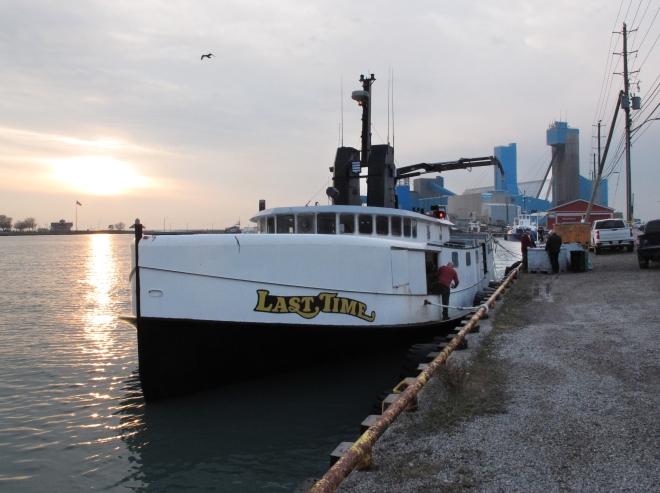 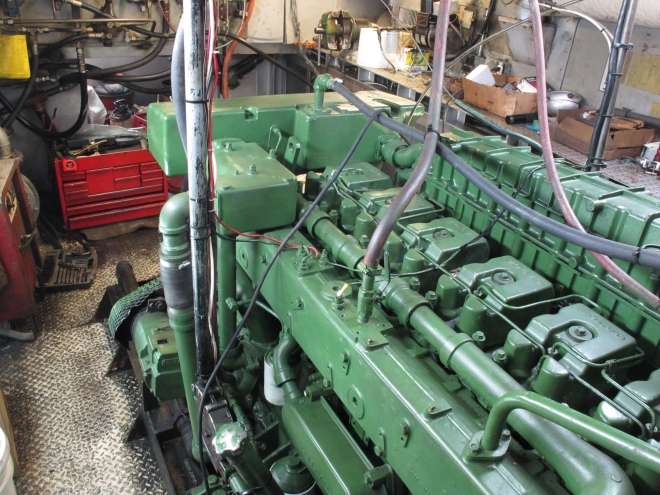 Dec 22  The Fish Tugs project has grown from the original focus on Ralph Hurley built boats. I’m now also looking at the wider scope of the fishing history on the Great Lakes, with a localized look at Port Bruce in particular. I’m searching for photos of Great Lakes fishing boats of various vintage, particularly older photos. If you have anything, including photographs, information and anecdotes that you wish to share please contact me. 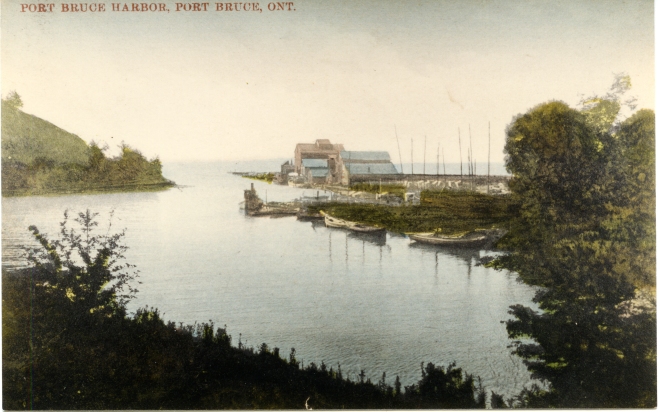 Historic postcard (reproduction) Note the US spelling of ‘harbour‘. The ‘u’ was added to later cards.

John Hurley and I have been posting a series of photos with captions documenting the build of the Last Time. John posts a segment each Friday on the Facebook Great Lakes Fish Tugs site. 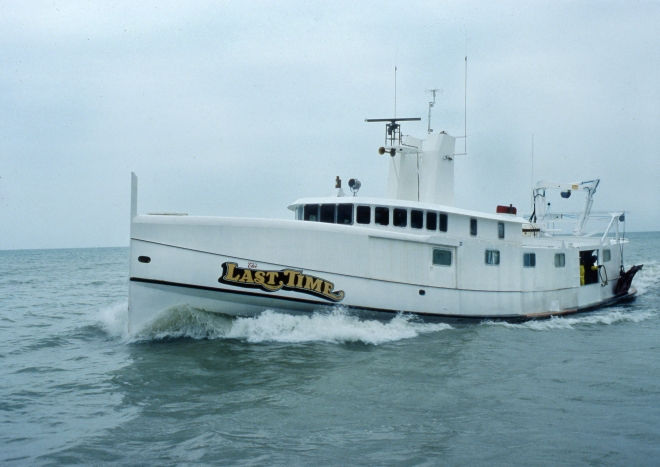