Wheatley has a large harbour for boats fishing the western basin of Lake Erie. In addition to the fish processing plants, there are boat building, repair, and maintenance services.

We rode into the Hike Metal Products shipyard. John introduced himself to Tony Oliveira, the manager. The Hurley name is well known among the fishing fleet, he is spoken of respectfully. The reliability, handling and lasting quality of his work is evident.

Mr Oliveira was very accommodating and took the time to guide us around. He led us aboard the Dorreta L, in for the mandatory four-year marine survey inspection. She looked spectacular, even in dry dock, gleaming with fresh paint and attention.

Note: The Doretta L has another antenna aft of the flag. It was obscured by a very distracting green tank in the background which has been removed for clarity. Visible along the keel is the grey engine coolant heat exchange pipe – cooled by lake water and recirculated.

The interior showed the care and attention that has kept the 47-year-old, hard-working Doretta L on the water, hauling nets in all weather.

“She’s a credit to the owner (Todd Loop),” Tony Oliveira said, “a boat that has been well maintained on a regular schedule.”

Impressive as the structural integrity and overall condition was, the wheelhouse was a gobsmacker, all wood with oak predominant. Mr Loop spends a lot of his time on the water and he wants a comfortable and attractive workspace. 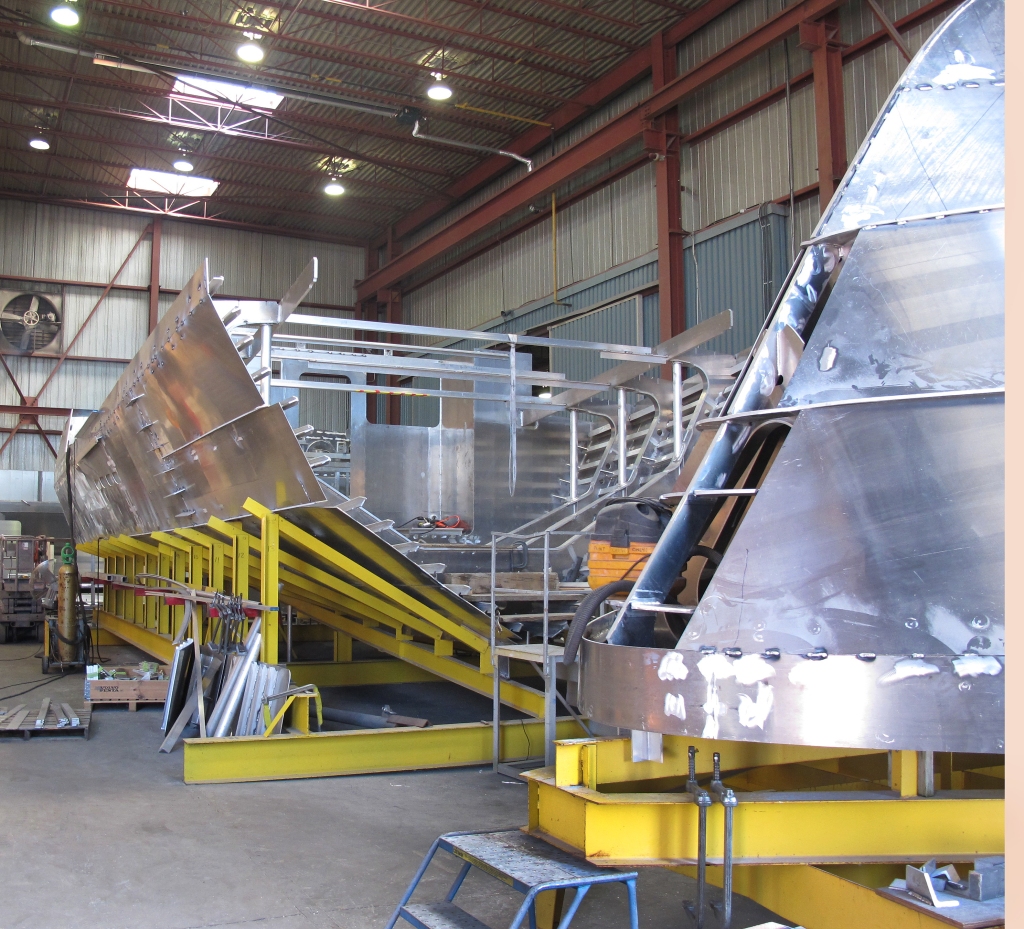 Photo showing SAR hull construction. The bow section on the right is constructed upside-down and then flipped and joined to mid-ship and stern. 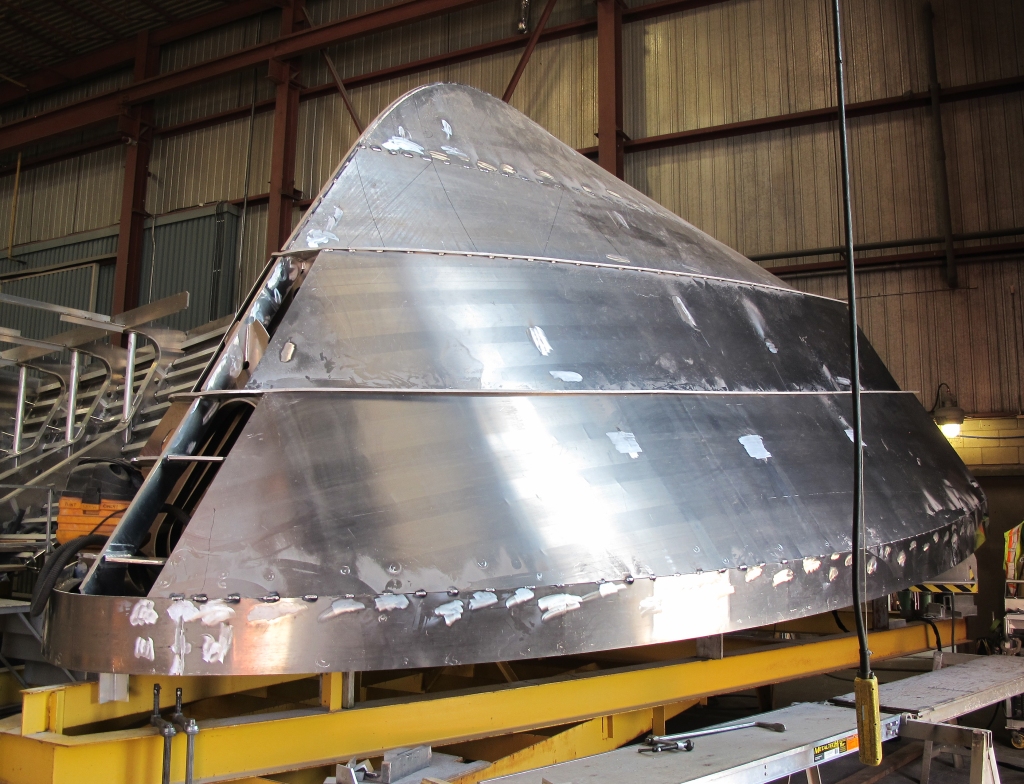 Boat and shipbuilding has been a Great Lakes industry for over 300 years. It’s good to see the tradition continue in Wheatley. The contract to build Canadian Coast Guard boats, awarded to Hike Metals, shows the capability of Erie builders.

The Hurley search took us back east to Erieau. Chatham-Kent is an almost featureless landscape, flat, large fields and deep drainage ditches beside the roads. I sympathize with motorcycle riders who live there and ride roads that are so straight and flat. Our home turf (Elgin county) features land that is not so flat with many curves, particularly near the river and creek valleys. I have a circuit that I show to visitors that is varied and interesting.

The main difference between the harbours of the western basin and those that serve the central/eastern fishing basin is that many of our harbours are surrounded by cliffs that line the shore. It makes for so dramatic and picturesque entries to the harbour.

Erieau has a large commercial harbour and many fish tugs were in port. We spotted the Mar-Vel-Ann, a Hurley build from 1973 and another example of the lasting quality of his design and craft. The care and attention their owners have invested in maintaining them is apparent.

The Mar-Vel-Ann is has been owned and worked by three generations of the Goodison family operating as Goodison Fisheries. Todd Goodison, the current owner pays tribute to his father, Douglas, and grandfather Kenneth, with their names on the bow. Classy.

A Mar-Vel-Ann crew member affirmed what others have told us, “a great boat to work on.” I can’t imagine an excavator operator, working with a relic from 1973, praise it’s quality and efficiency if used on a job site today, yet Hurley’s boats still earn a living for many fishermen.

This week we rode to nearby Port Stanley. Something about our riding motorcycles to find Hurley boats seems fitting. We enjoy both the riding and discoveries.

Once again, luck was on our side. A beautiful day to ride and another Hurley fish tug, the Carol Ann II. 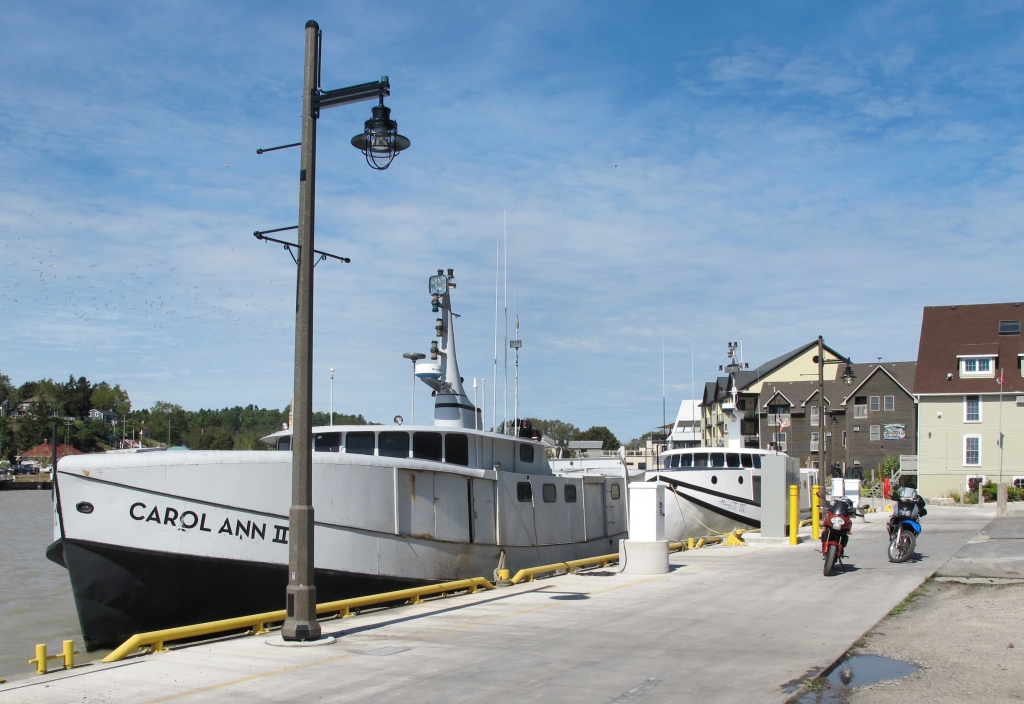 Not a Hurley design, but Ralph Hurley did help build it in Bronte before starting his own business in Port Burwell.

The Carol Ann II was both lengthened and made wider at a later date by Gamble shipyard in Port Dover. George Gamble was Ralph Hurley’s uncle and taught him welding.

Carol Ann II is powered by the ubiquitous Detroit Diesel, an engine common to many fish tugs of that size. Captain Mark Golem told us it puts out 400 hp.

At least 73 years on the water.