August 31 Lake Erie has a rich history, local history here. It means so much more when the locale is familiar. I posted a piece about Long Point shipwrecks and Abigail Becker in January. Becker was a true heroine, a ‘shero’ in newspeak. Screenwriters should seriously look at that story, a true adventure epic.

But there is more to Erie history than shipwrecks and naval battles. There are stories of the families and communities that depended on Lake Erie to provide a living- fishing being the most common- plus the spin-off shore-based services that grow with marine demand.

Lake Erie is one of the largest freshwater fisheries in the world. In fact, in the 1920s Erie was the largest fishery with fish shipped all over the world. Prosperity continued until the dark decades when the Great Lakes were treated as sewers for industry and cities. Sanity finally reared up and the fish stock rebounded through good management.

The Great Lakes waters are quite different from those of the oceans. The frequency of the waves is shorter and often more violent, the weather can change rapidly and Erie is particularly susceptible to sudden and drastic changes due to its shallow depth. Nasty storms whip up quickly. Consequently, the boats must be of different designs than ocean-going vessels.

Those iconic Great Lake freighters would break in half in a large Atlantic blow. The waves are further apart with long valleys between them. A fishing boat used in Atlantic waters would not work well in Lake Erie’s hard choppy waters. It might wallow, pitch and possibly rollover in a typical too-fast-to-believe-it-happened storm on Lake Erie.

The waters dictate the design needed to make a good working fish boat.

Ralph Hurley 1911-1987,  boat builder of renown was from Port Burwell, Ontario. Hurley knew the fish boat design needed for the lakes and he could build it too. His formal education ended after the eighth grade but a working education and intelligence proved to be more useful. 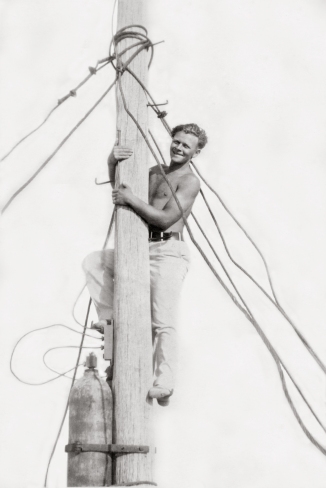 The first boat from his Port Burwell shop was the George H. (1947) now the A.R. Getty, followed by many more boats that are still in service today.

Hurley-built boats are low riders, broad of beam with a hull designed to glide through waters that craft with differing designs might struggle through. Tough boats, built to work.

And work they still do, after decades of service. Some in their sixth decade are still fishing the Great Lakes. How many working machines can that be said of? Certainly not any trucks, planes, train engines or rolling stock that I can name.

Last week John Hurley  (Ralph’s son) and I visited Port Dover on a fine day for motorcycling, a good ride to remember. We parked the bikes and walked the docks where the fishing boats tie off.

We hear a vessel coming in, a low rumble of marine diesel, authoritative and full of torque. Into view comes the James D, built in 1957. 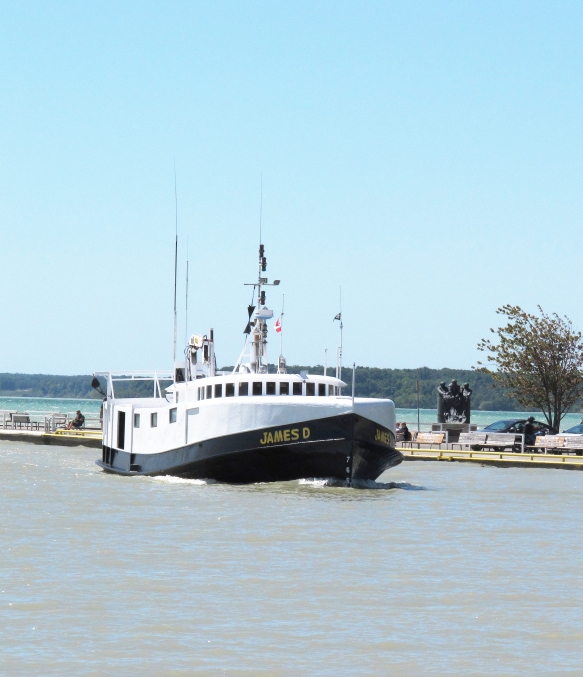 Owner/captain Eric Ryerse said that James D has something that sets her apart from other tugs especially running into heavy waters.

Fishing out of Lake Superior in the ’70s,  the James D was the only vessel willing to brave fierce weather to search for the lost Edmund Fitzgerald in the great blizzard of 1975. That’s a tough boat.

Another Hurley classic, the Omsteader, came into Dover later on. She’s a larger version of the James D, another beauty built in 1981 by Ralph Hurley at Port Burwell. The same recognizable classic Hurley design. Eighty feet of Erie trawler, still working hard.

The Omsteader returns to Port Dover, 2019

The Hurley boats may appear to be flat, wide and ungainly in the water but a look at the hull design tells a story that cannot be read above water. Here are some photos from the Hurley archive showing the hull of The Last Time during construction.

The Last Time was constructed after Ralph Hurley had retired. He was persuaded to build one last fish tug. Over 80 feet in length, too long to fit inside the fabricating shop, the Last Time was built outdoor. The Omsteader (4 pics up) is the same size and design. 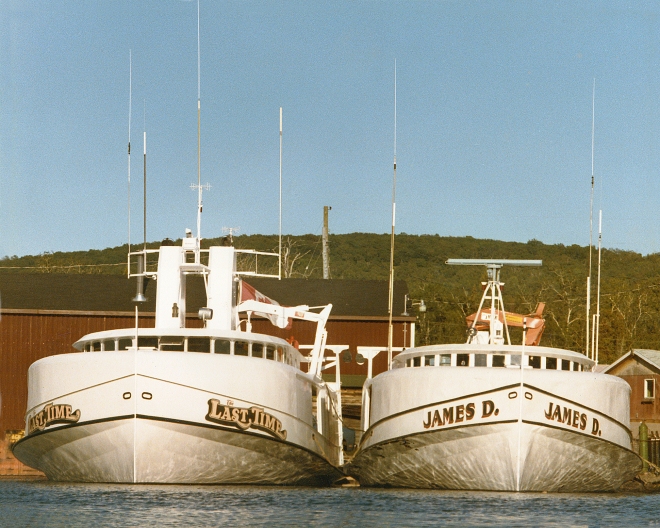