I have ridden motorcycles since I turned 16. Motorcycle riding is a passion for me, an obsession. When I was younger I would ride all year if the roads were clear of snow.

Motorcycle fever first started when I was a very young boy, riding in the back of my aunt and uncle’s car on the way to grandpa’s cottage in Muskoka. From behind the car, a loud rumble announced the presence of the Black Diamond Riders M.C. Looking out the back window in excitement I yelled: “it’s Johnny Sombrero!” I recognized him from photos in the newspaper.

That was a time of motorcycle ‘gang’ media hysteria, fueled in part by the movie The Wild One. It had some great lines like, “What are you rebelling against, Johnny?” “Whadda ya got?”  Classic Brando.

My frightened aunt says to me “Don’t look at him!” She likely had visions of us being savagely beaten (or worse) by heathen, vicious bikers.

I continued to look out the back window, waved and was rewarded with a nod and a smile from Johnny Sombrero. That was the moment of decision, someday I would get a motorcycle. Thanks, Johnny. 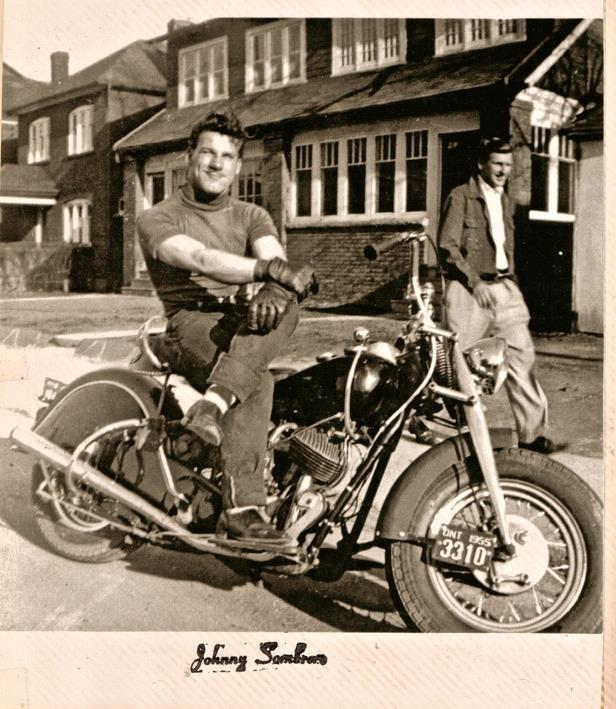 Roll Out the Resto

It was the moment of truth, the test of my mechanical abilities. All systems checked, the finicky Lucas electrics were refreshed (new electronic ignition, new wiring harness, modern connections installed) and the fuel tank filled with fresh gas.

Prime the gas in the new carburettors, choke on, transmission in neutral, ignition on. Prod the kickstarter to top of the compression stroke. Rise up on the kicker, right knee bent and then all weight transferred down through the kicker in a smooth motion. Nothing. Repeat the procedure and hear the first stumble of ignition.

The third kick and music to my ears- the roar of a fresh Norton Commando engine. I burst into a happy victory yell, a mixture of satisfaction and relief. My grin felt like it would split my face in two.

I was obsessed with motorcycles at a very young age (see “Blame Johnny Sombrero”). I have owned a motorcycle since I turned sixteen and the variety has been interesting. In my day new riders followed a natural progression of engine size and power. I shudder when I hear of a new rider starting with a hundred horsepower motorcycle today and I’m saddened, but not shocked when I told the rider has crashed.

My first bike was a Yamaha YG1 80cc. My father co-signed a loan and I rode that bike every day of my sixteenth summer to a Putnam tobacco farm where I earned the money to pay the loan off. I did some crazy things with that first bike. I rode to Mississauga on the 401 in December. It was so cold returning that I tucked in behind a transport to escape the wind. When that failed to keep me warm, I bought a newspaper to wear on my chest under my jacket at a truck stop. Almost burned out the hot air hand dryer in the men’s room trying to restore the feeling in my fingers.

I think I was hypothermic when I left the 401-  I stopped on the shoulder of a road and not feeling my legs or feet, I fell over with the bike. A few minutes of “jumping jacks” restored feeling enough that I did get home eventually. I must have shivered in the hot shower for a half-hour, then into bed.

An 80cc motorcycle was not the ideal machine for highway riding. I had the throttle wide open the entire time and it might have gone 65 mph with a tailwind, downhill. I sold that Yamaha and bought another- a 250 YDS3 with a delightful intake howl and some real power and acceleration. I rode that bike for a number of years, from Thunder Bay (Port Arthur/ Fort Williams at that time) through Minnesota (Hwy 61), Iowa, Nebraska, Kansas, Missouri, Illinois, Indiana, Ohio, Pennsylvania and New York.

That led to further purchases- a Honda CB 450, a Matchless G80 CS in road trim (worth big $$$ today) – but the bike I lusted for was a Norton Commando, the most beautiful British bike ever. In black with gold trim, the colour god made motorcycles.

I eventually did get a five-year-old Commando, the 1972 Combat model. Very fast and great handling, but still the typical keep- wrenching- to- keep- riding, oil- leaking British motorcycle (they are much more reliable today, with both Triumph and Norton still in business).

After around six years of riding the Norton, I had a very bad crash. The bike was ruined and it took several operations to repair my personal damage. 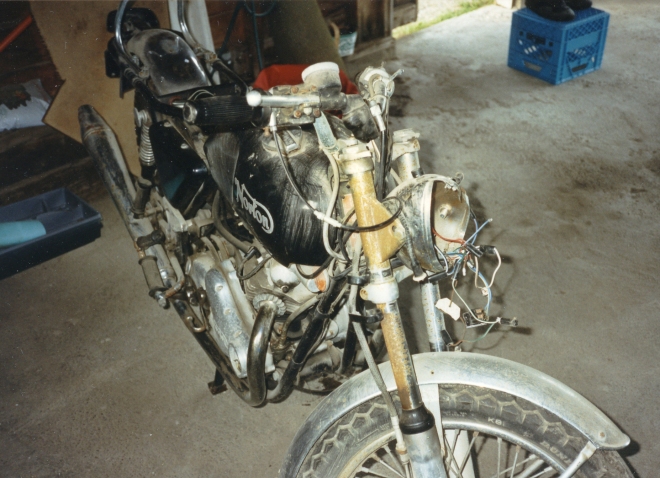 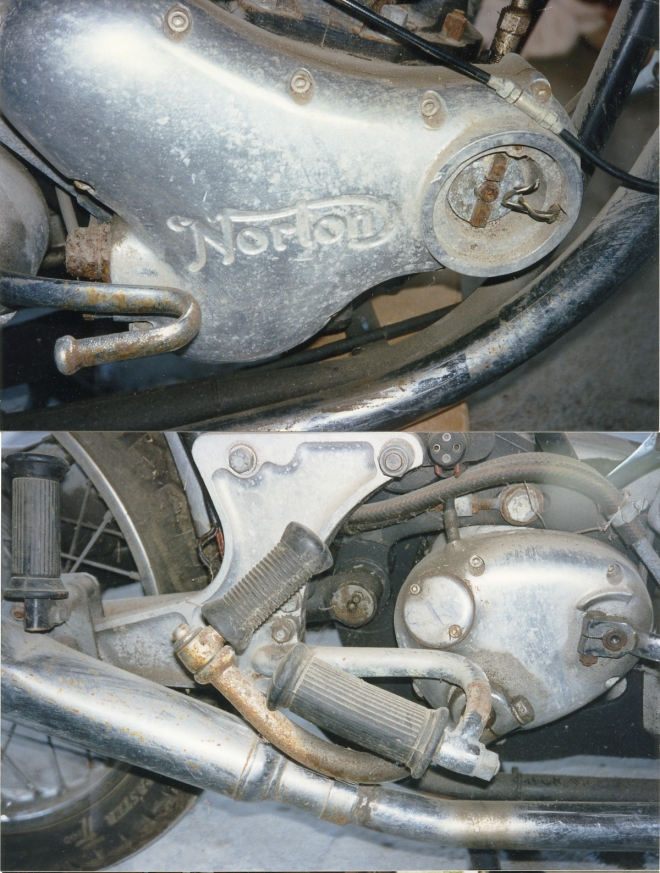 The ruined bike gathered rust and dust in a barn and then a garage. My guilt mounted as I procrastinated on a rebuild for many years. Life got in the way- family, business etc. I never lost the urge to ride and borrowed bikes whenever I could.

Finally, life stabilized enough that I could afford the needed time and money to consider bringing the Norton back to life.

Penance proved to be very expensive- I couldn’t be satisfied with a stock rebuild.

It took two years. I bought the factory workshop manual and a parts book then stripped it down to the last nut and bolt. The end result was a bike better than the original. All the available stainless steel bolts, alloy wheels with stainless spokes, new exhaust mufflers, controls, headlight, gas tank, seat, tires and much more. The frame was powder- coated, I polished the aluminum alloy parts, a lightweight fibreglass cafe-style front fender installed- the entire works. The engine and clutch were refreshed. I took the transmission apart, replaced a few bearings and a gear that was known to fail. That was the most complicated mechanical task. Taking things apart is easy- proper assembly can be a challenge.

The most difficult work for me was the new electrical harnesses (main and headlight),  getting the connections right. I learned a lot about electricity, a subject that has always mystified me. My previous knowledge about the evil Lucas electrics consisted of “don’t let the smoke out of the wires”.  There is a very good reason that Joseph Lucas was known as the “Prince of Darkness”.

The end result was a successful rebuild. I took a great amount of pride in my work. 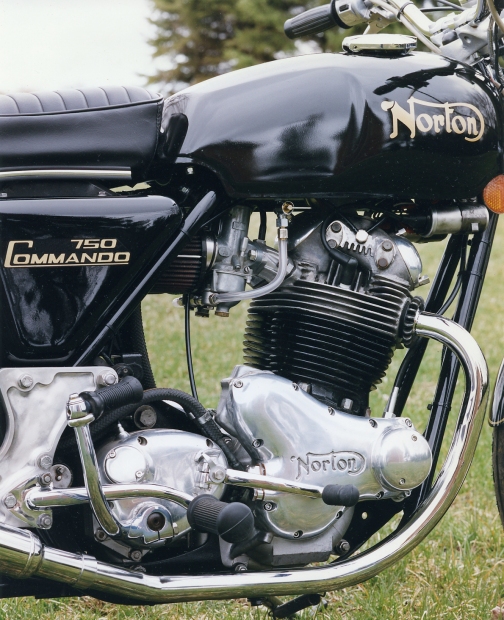 In the spring my mind turns to motorcycle riding. Not spring yet but there was a definite hint in the air this past weekend.  I turn to YouTube for a motorcycle racing video fix.

Can you imagine road racing on the roads in North America? I’m not talking about the occasional Formula One events that happen in Toronto and Montreal- those over-hyped, outrageously expensive, fenced-off events, with spectators kept well away from the action.

You’ve heard of the annual Isle of Man TT motorcycle races? Actually, the TT  is a time trial (although it stands for Tourist Trophy) with riders starting at ten-second intervals. Possibly the most beautiful of all racing venues, the TT is a week-long festival. With the exception of the paddock and grandstand, it is free for spectators. Motorcycles race past at speeds that can surpass 200 mph, mere feet away with no barriers. Close enough to reach out and touch- if you want to lose an arm. Fearless riders brave curbs, bridges, jumps, and brick walls that line the roads.

Here’s a good video to illustrate– well worth the watch. If it doesn’t make the hair on your arms stand up…

In Ireland, the races are even more radical. Mass starts, narrow country roads, rain or shine. Every weekend, every weekend, of summer. These riders bash fairings, elbows and other bits. They are remarkably composed, expert riders. 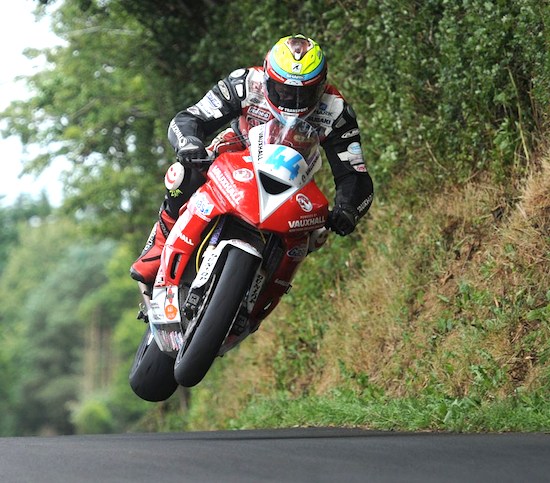 All of the racers are privateers, no factory teams. Manufacturers do not want to be associated with races that often result in death. Not that MotoGP (equivalent to Formula One) is without danger, but there are fewer deaths.

A video of Irish racing I watched had a funny exchange between a racer and his mom:

“Son, when are you going to buy a house? You can’t sleep in your motorcycle.”

Here in North America, the authorities try to wrap us in a mantle of supposed safety. The sports that carry an extreme risk of immediate death like free-climbing mountains are generally out of the public eye, although the internet and tiny, wearable cameras are changing that.

Notice that I wrote the risk of immediate death. Gladiators of ice and gridiron are paid to pound each other in front of ecstatic fans. Most deaths occur after many years of concussions, well out of the public eye. Just don’t race motorcycles on the streets.