Jan 31  Upside-down or just right? Some of my photos look better, in my opinion, turned 180 degrees. The chairs photo in the Fochemax and Abstracts gallery is one example. There are two other photos in there that are also “flipped”, although they are a 90-degree turn only. Can you guess which?

Here’s another photo that I recently scanned from a colour negative. It was taken at a Remembrance Day march in 1987. I prefer it upside-down. The shadows were more interesting than the actual figures and a better feel of the march.

Jan 29  It is commonly said that Canadians love to talk about the weather. With such a wild variance of our weather, it is not surprising.

Yesterday I woke to a frigid -20C morning. By afternoon it was -8C and rising. Late afternoon a snowstorm began and the temperature kept on rising. When I took Wilson for his evening stroll- aka pit stop- it was raining and +3C! That is a 37F degree change for you old-school types.

The same pattern is repeating today, minus the rain, and predicted to plunge to -20 again overnight. The forecast is for three frigid days then above freezing and snow/rain for a further three days.

Surrounded by the Great Lakes we are vulnerable to crazy weather pattern shifts. I am amazed and impressed with the accuracy of the forecasts. I am less impressed with the outcome. I could live without seeing another winter, ever.

One day closer to spring and riding season!

Jan 22  In today’s world I would likely attract attention from authority for taking this photo, and most of my photos of kids. 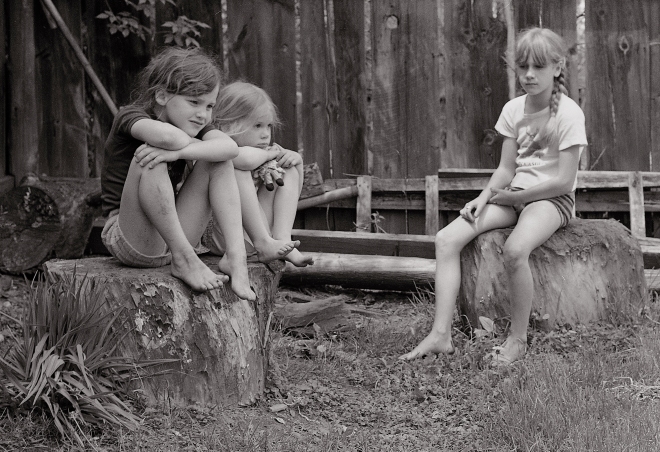 A reader writes:  Re: Pensive Kids

I am relishing your photo. Thank you! I wonder what those little girls were thinking. Were they contented? sad? feeling lazy after running out?

Your photo takes me back decades. It captures a wonderful sense of childhood and memories of moments on a warm summer day when children were free from parental indulgence and organized activity. It was considered normal then for children to be bored, run barefoot, and hide themselves away from adult supervision. Time to be pensive indeed. Time to let our imaginations run wild.

How often we heard, “Go outside and play!”
Come to think of it, I could be accused of uttering those words myself.

Thanks for the feedback.  Outdoor activity for kids was the norm in my day. The place to escape parental control, make our own world. We wanted to be outside, we dreaded the streetlights illumination signalling day’s end and the return of parental control.

Outdoors, we were the masters of our universe with only occasional interruptions by some bossy hag, who we would both ridicule and fear.

Jan 20  The human subconscious works in curious ways.  Lately, mine has been working overtime.

A couple of days later I woke in the night thinking about a lady who bakes pies that I order on occasion. Not just ordinary pies either, she has won many first place ribbons in baking contests. Unfortunately, she moved over 100 kilometres away so I hadn’t seen her since last July. Later in the morning, I see her here in Aylmer.

The third time is the charm, as the expression goes. I was driving to the city and, for reasons unknown, I start thinking of a hill near St Thomas that is called Merrymount. When I return home I find a story from London about an area named Merrymount. It’s not a common name that would run through my mind often, in fact, I likely hadn’t considered the place name for decades.

If only I could dream about the winning lottery numbers.

Wilson, like all dogs, has what must be vivid dreams. He snorts and grunts, legs windmilling as if he’s running. I call those dreams his rabbit-chasing movie. If he sees a rabbit the next day (common here) does he think, “Hey, I had a dream about that rabbit last night!”

Photographic prints will sometimes get stuck together if left in a stack for an extended period, particularly if the house gets humid in summer. Unfortunately, there is no way to separate them without damage.

I discovered a stack of 8×10 ‘proof’ prints that are stuck like glue. Proofs are the test prints I made prior to final printing, so they were not particularly valuable other than the fact that I did not always make further prints.

I wonder why I never took this image further- I only printed one. Perhaps it’s because I dislike winter so much, or maybe the fact that winter scenes do not appeal to me as other than graphical designs. 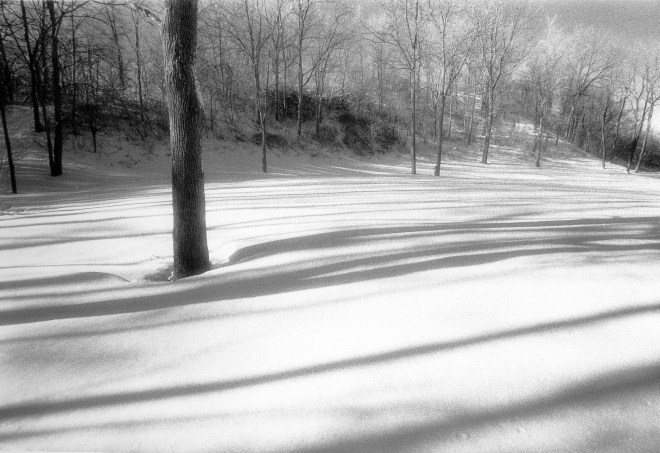 This next image of a cicada exoskeleton, the shell they shed while changing into a winged adult. This image shows some of the print damage. 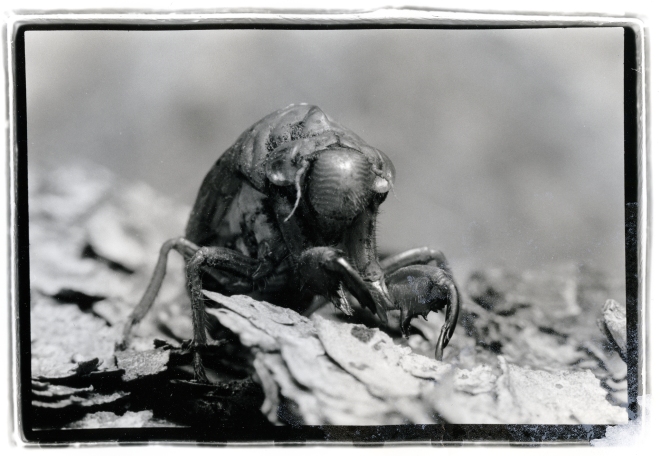 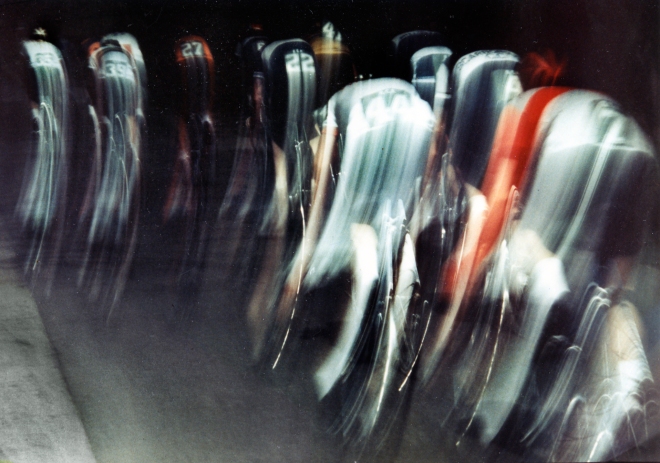 Jan 12  Cycle Canada, a monthly motorcycle magazine, is in trouble, as are most magazines and newspapers. I have been a loyal reader and long-time subscriber for much of its 40+ year history.

Victims of ever decreasing advertising revenue plus the interweb influence and the fact that many people don’t read books or magazines.

Cycle Canada had gone from a monthly to ten issues per year several years ago. In the current issue, the editor announced that the magazine will be published just eight times per year. Print font size has grown smaller over the years too, a challenge for my poor eyesight.

Significantly, there is no longer a calendar included (for subscribers) with the December issue. The first time in many years I will not have a motorcycle calendar hanging in my kitchen. The horror! 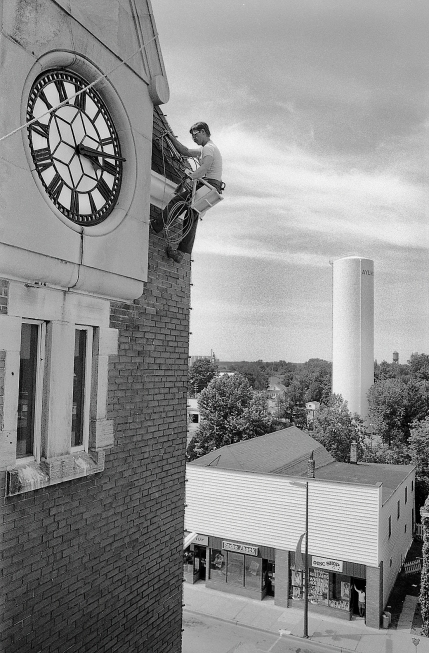 Time & events. It is common for people to remember exactly what they were doing when a significant world or even personal event occurred. JFK assassination? check. 9/11? check.

Of course, I remember when I took this photo, but more importantly, exactly how I felt: terrified.

I am not fond of heights at all, but the desire to capture the image overrode my fear. To reach the roof required climbing a ladder to the eaves and then transitioning to a second ladder that ascended a steep mansard roof. The switch from one ladder to the other almost paralyzed me.

When I did reach the top I needed several minutes to calm down and let adrenaline subside. I was shaking badly.

Once I raised my SLR to my eye the fear was overcome. War photojournalists report the same phenomenon. The camera becomes a barrier to fear. The desire to get the photo overrides the fear. Excitement definitely plays into it too- the rush from knowing a fine image is on the film, videotape or memory card.

I often wonder if steeplejacks are born without fear or is it a learned process?

Jan 7  Rain, freezing rain and snow simultaneously, as Wilson and I took an abbreviated hike this morning. Brought to us by the Wicked Witch of the East, the lazy wind that would rather blow through me than around me. A source of aching joints, accompanied by the flat grey light of very short winter days, is not conducive to optimism.

My solution is to bury my head in books and occasional Netflix binging.

Lately, I have been reading several books about the Long Point region here on Canada’s south coast, Lake Erie. Long Point is possibly the most dangerous area for sailing/ motoring boats on the Great Lakes. The spit that extends halfway across the lake is notorious for shifting sandbars and evil weather that can appear quicker that beggars and confidence weasels at a lottery winner’s door.

Hundreds of shipwrecks have taken lives, cargo and fortunes. I had some personal experience on a small sailboat regarding just how quickly the weather can change and how terrifying it is around the end of the Point in a storm. Current pushing vicious waves strongly from the west confronting that nemesis, the east wind. Havoc, fear and adrenaline in large doses. I don’t recommend it.

One story that is seldom spoken of is that of Abigail Becker, known as the Angel of Long Point. In 1854, braving icy waters, she dragged many men off the wreck of a three-masted schooner, Conductor. Unable to swim, she waded out to the men and dragged them to shore. It is quite a tale, as told by Harry Barrett in his book Lore and Legends of Long Point.

The story would make a fine adventure movie complete with some beautiful scenery, vicious storms and a female lead playing the role of a strong, fearless woman. Any screenwriters interested?

There would no doubt be a romantic angle thrown into the film, studios cannot resist adding elements to stories that did not occur during the actual event. However, the tale is strong enough on its own without fantasy getting involved.