Is the avoidance of vibrant colours on houses a nod to the modest Canadian myth, or a developer’s profit boost? Are they selling “earth tones”? If so, those houses will fit right in- behind the manure pile.

Another sign photo contributed by Paul, with his description. 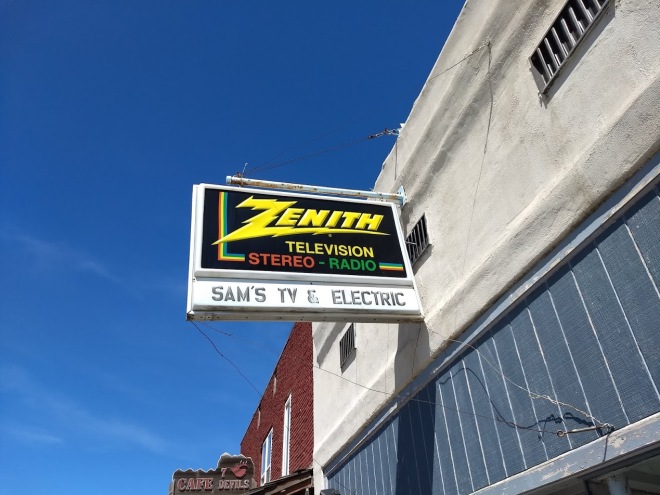 This sign from Council, ID. Its claims to fame is nothing. Continuing my theme of brands that faded away ages ago, I give you Sam’s TV & Electric, specializing in Zenith TVs. Sam closed the shop up ages ago but he forgot to take the sign down.

June 26 From the archives, a photo of historical note. 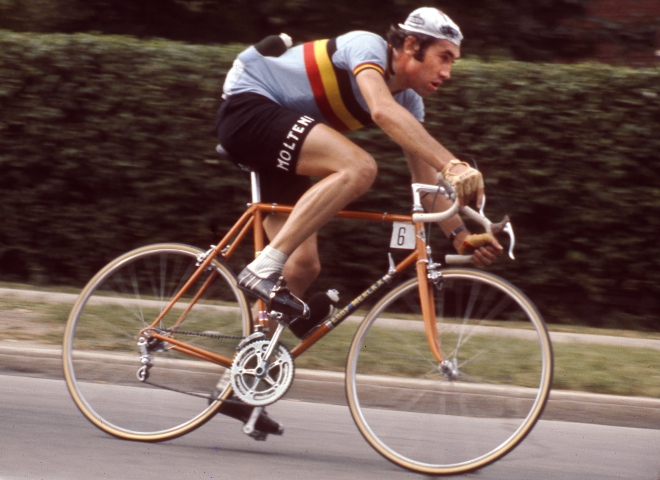 Merckx is arguably the greatest racing cyclist of all time, with 425 victories to his credit. I was fortunate to have an opportunity to photograph him in action at the UCI World Championship road race in Montreal. I was active in club racing at the time and was thrilled that Merckx, who I considered the greatest, won the race beating his rival Raymond Poulidor. It was exciting to see history in the making.

As a photographer, I could not resist taking photos of the spectators too. This from Gallery 2 (last photo) was my personal favourite. There is another photo of the race leaders and spectators in Gallery 2. 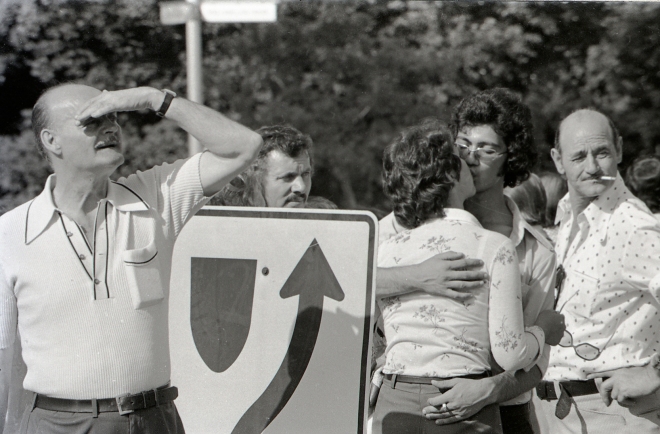 June 23 Three new photos from 1975 added to the signs and graffiti gallery.

June 22 A reader writes: “I’m getting caught up on your rants. I’m not sure why I got out of the habit: life gets in the way.
In your Nov 26 rant, you mention that Marco Polo brought spices back from the Orient. I have recently learned that there that your teacher may have been wrong about Marco Polo! There is a raging academic debate, somewhat well-founded (meaning no tinfoil hats or conspiracy theorists were involved) that Marco Polo never left Italy.”

Thanks for that, I stand corrected. Well, technically I’m sitting down, so I sit corrected. Yes, history has a habit of sometimes being the winner’s story.

“The history of our race and each individual’s experience are sown thick with evidence that a truth is not hard to kill and that a lie told well is immortal.”   Mark Twain

Here are his latest photos and description. Thanks, Paul. 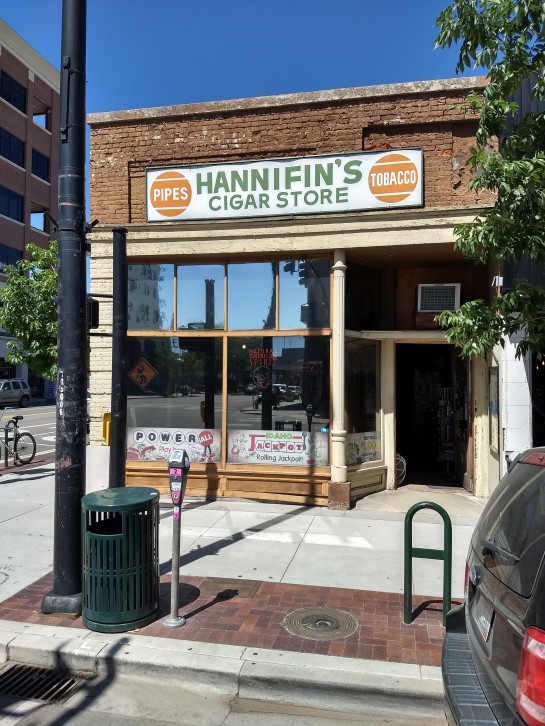 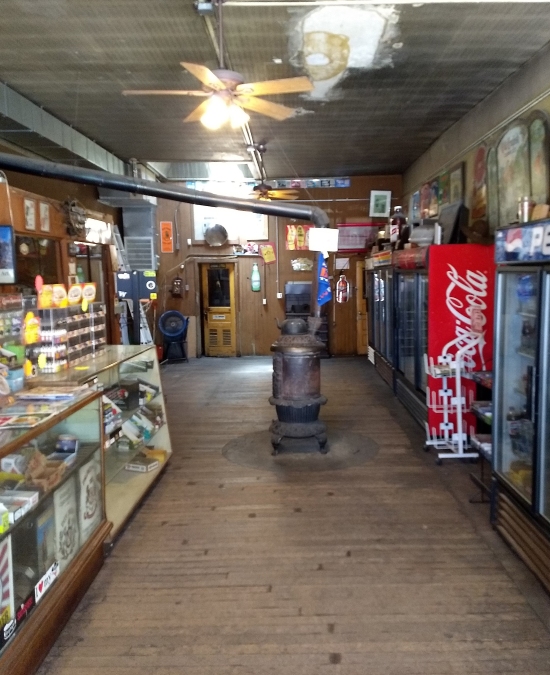 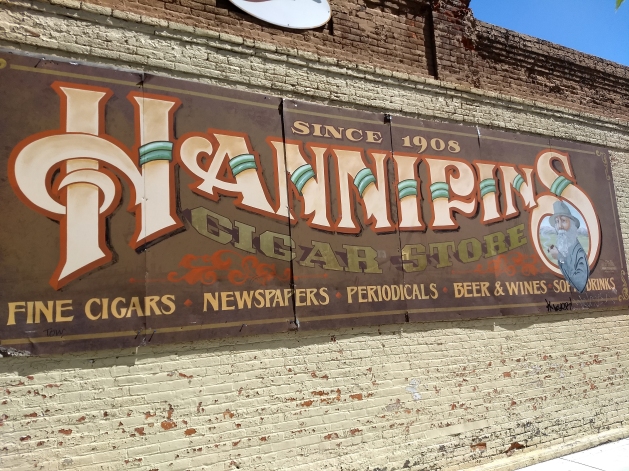 “Here we feature Hannifin’s cigar store at 11th and Main in Boise. This is where I waste money on PowerBall lottery tickets when I’m here.

The building has been around since at least 1895 when it was Plowman’s grocery store. Hannifin’s opened in 1908. It has had numerous owners but has stayed in the same line of business since then. The current owner bought the business 11 years ago and plans to operate it as long as he can, or until he wins the big one.

The floor is original and the remainder of the interior is mostly original. The stove has always been in the same position, although the stove itself is not original.

The building is owned by someone from California. Mention California and there’s automatic eye-rolling by Idahoans. Boise is pretty good about preserving old buildings, but you never know. It depends on how much backbones the politicians can muster when the rapacious developers move in. Maybe I should have restated that – ‘backbone’ and ‘politicians’ don’t belong together, kind of like ‘men’s soccer’ or ‘jumbo shrimp’.”

That soccer comment might rile some folk, Paul, but I am simply the humble publisher. I won’t give out your info to the pitchfork-wielding  politically correct -another wonderful oxymoron- masters.

When a pet dog is ill it is more difficult for me than dealing with personal illness and, sometimes, with humans. A loyal friend, unable to say what hurts and not complaining, although I see into his gaze.

Wilson fell down sick last weekend. It was very nasty- he could not stand or walk, no appetite, water only. He slept almost constantly. His vet hospital was closed.

To the vet first thing Monday morning. Fortunately, it was a geriatric canine disease, no prescription except time. It usually lasts 72 hours with diminishing effects for two weeks. Wilson was back on (unsteady) legs in the evening. Every day since has been better, the walks get longer, appetite back to near normal.

It was heart-wrenching to watch him totally helpless, and a joy to see him almost back to normal now. I was shocked to see that he was 20 pounds lighter. Not that he is thin, but he has lost muscular mass, particularly his younger barrel chest and tough dog legs.

It is difficult to accept that Wilson is an old dog now. Some might say the same of me. I took a photo of him yesterday. Still a handsome dog- despite my teasing description of his ‘clown face’. His face fur is greying, a distinguished gentle dog look. 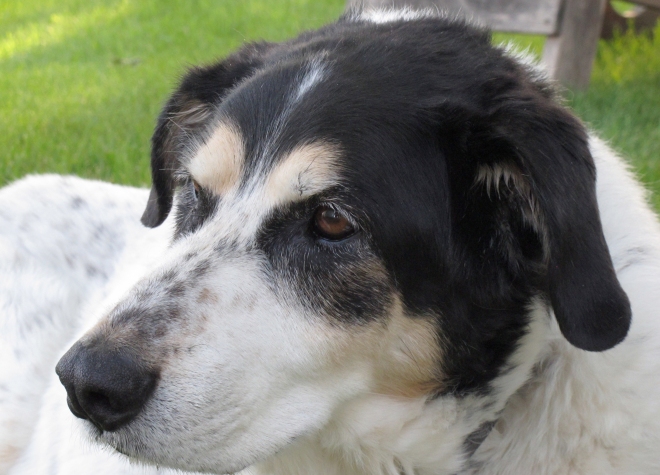 Stanley the painted turtle has announced that he would like to go for a tour. I have agreed that it would be good for him to broaden his horizons. Stay tuned for updates.

Meanwhile, Gordon has dug into his role as Stanley’s watcher. A few new photos of Gordon on guard. 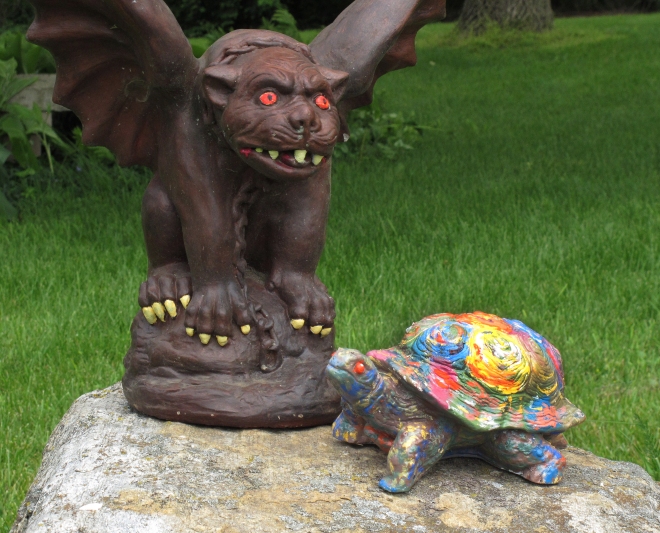 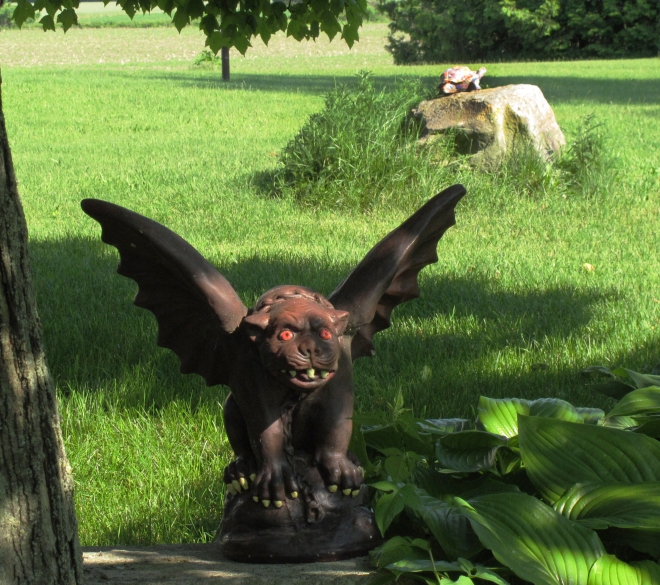 June 11 Gordon, the garden guarding gargoyle, had his nose out of joint when he saw Stanley the painted turtle’s new finery. He demanded the same, he was tired of being a drab brown gargoyle.

Not wanting dissension in the yard, I treated Gordon to a manicure, a pedicure and a set of coloured contact lenses, plus some dentistry.

Gordon was so thrilled with his makeover that he decided he wanted a name change to match his new self-appointed task- guarding Stanley. He shall now be known as Gordon, the Stanley guarding gargoyle. 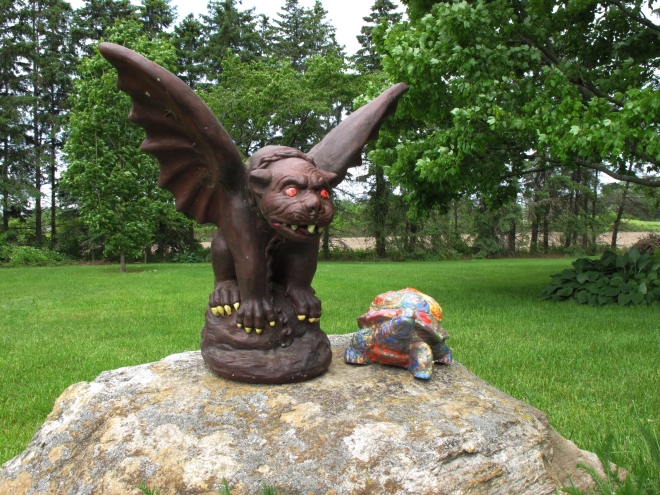 Update: the snowball shrub seems to be holding back a total onslaught from the viburnum beetles (in the larvae stage). as I posted on further down this page. It’s early days yet, but the damage appears to be not as extensive as the total leaf-strip event of last year. I’ll watch it carefully.

Now, get back to work in the garage, David, you’ve got a new chain and sprockets to put on your motorcycle.

June 5  My brother Paul, sent me this photo of a sign in Boise, Idaho, along with a very apt description. 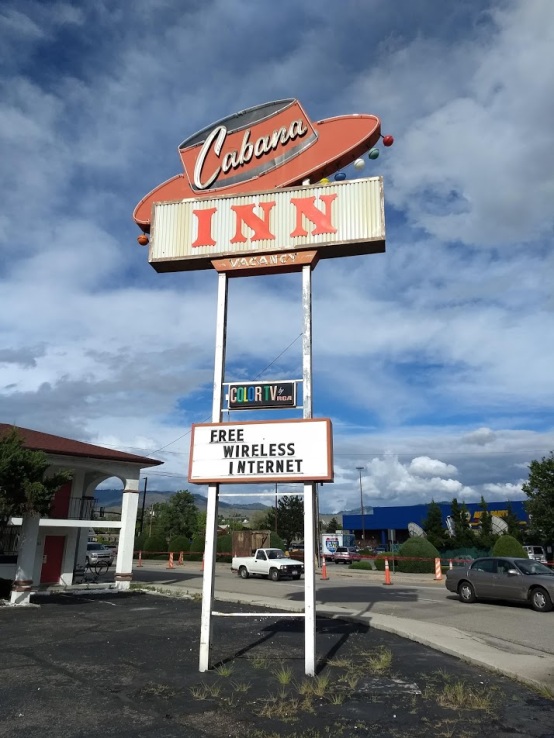 “I especially like the juxtaposition of ‘Color TV by RCA’ (RCA disappeared in the 80s) with ‘Free Wireless Internet’.

There are sections of Boise that scream 1950s in Technicolor, a movie set for a caper flick. This is the motel row from the days when the highway went straight through downtown. Cruising in the Chevy rocking massive fins, Dad in Hawaiian shirt and Ray-Bans, Mom in a kerchief and cotton print dress, freckle-faced kids jumping in the back seat  ‘Mom, Dad let’s stay at the Cabana, the pool looks terrific’.

The pool has since been filled in and paved over.”

Thanks, Paul, for the photo and words, very funny. What do you think folks, should Paul start a blog of his own? You’re welcome to be a guest writer here. In fact, I’d like to post some written work of other writers. Anyone?

June 3  They’re Back. The dreaded viburnum beetles are back, devouring the snowball shrub. I posted regarding them last June, scroll down the link to see them in macro.

Here is the shrub today. I will photograph it again in a few days to show the progressive damage. 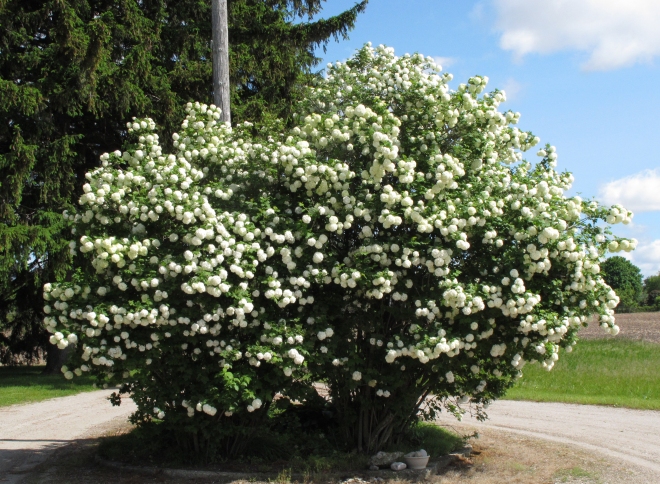 Beautiful today, but a closer look shows the pest damage. 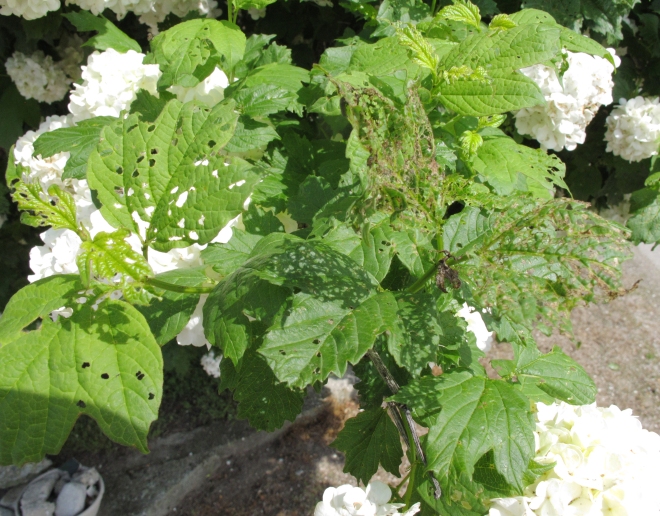 I wonder what our forests and foliage will look like after decades of foreign invasive species damage? It’s a safe bet that more unwelcome flora and fauna will arrive.

I’m glad that I won’t be here to see it.

Later in the day.  Lighten up dude, post some previews of photos to be added to the gallery later, give ’em a taste. Here are three verticals: 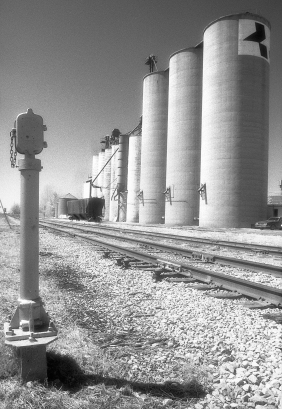 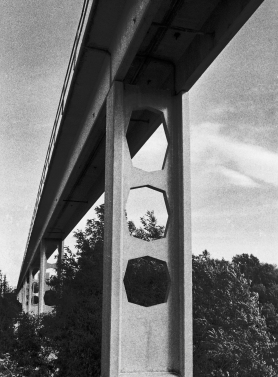 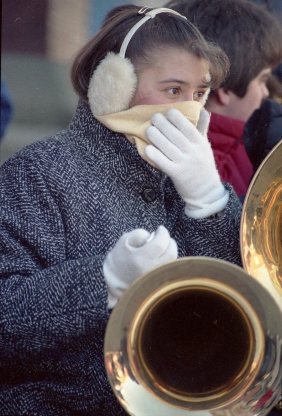 For older posts use the drop-down menu under ‘Rants.”