May 28  Another photo oldie uncovered from the archive.

I chose this photo for its humour, one of my favourite photographic subjects. I’m not talking the ‘cute cat climbs the Christmas tree’, or similar YouTube fare. Humour in a photo involves irony, mystery, timing, composition, sarcasm- many subtle, or not-so-subtle, factors. Plus unknown influences that tickle funny cells, reactions we experience in different ways.

May 25  World Turtle Day occurred on Thursday, May 23.

*The purpose of World Turtle Day, May 23, sponsored yearly since 2000 by American Tortoise Rescue, is to bring attention to, and increase knowledge of and respect for, turtles and tortoises, and encourage human action to help them survive and thrive. *Source: Wikipedia

I had intended to post this on Thursday. Unfortunately, I finished my project late, but here it is. I present my pet turtle, newly named Stanley, who has been guarding a rock in my yard for many years.

The ever-loyal Stanley has stood guard, never sleeping, for so long that he wears the same patina as the rock.

Despite being crapped on by birds, pummelled by wind and sleet, he has weathered well. I haven’t even allowed him winter hibernation. That has ended- I will bring him indoors during future winters, show my respect.

That is the least that I could do for him, and to take it a step further I would treat him to a new wardrobe (a ‘make-over’ in trendy speak) and give him a name. In other words, an identity. Instil him with some new-found pride. Thank you, friend Lisa, for his name. I think that Stanley suits him well.

I also wanted to establish his breed. After some research, I decided that Stanley is a Painted Turtle, a native turtle here in Ontario.

I now present you with Stylish Stanley, the Painted Turtle. His pride shows, don’t you think? 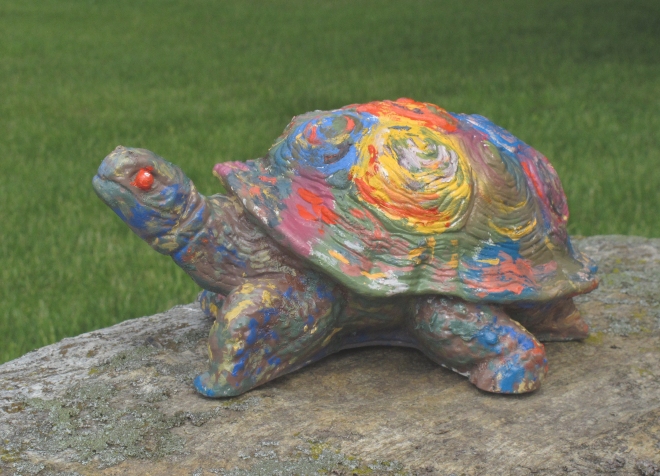 With tongue now removed from my cheek, I do ask all of us to stop for turtles on the roads. They are endangered everywhere.

Pressure your MPP to stop allowing wetlands to be drained and developed. Wetlands are critical for many endangered species and for controlling increasingly frequent floods. Consider a donation to Ducks Unlimited, a very worthy organization doing great projects without using your tax dollars.

Update. Two days after the above was posted, as I rode my motorcycle down the long lane, a pleasant surprise- a painted turtle was crossing to the drainage ditch on the other side. It wasn’t quite as colourful as Stanley.

Digging around in the film archive I found more rodeo and carny gems in the b&w files.

Soon to be added to a new planned collection in the photo gallery, “Small town and rural life.”

This first photo is of carnies enjoying their breakfast (coffee and a smoke). Photographing the carnival scene, as well as earlier memories of small-town fairs, may have influenced the Sad Saga of Odious Oats. 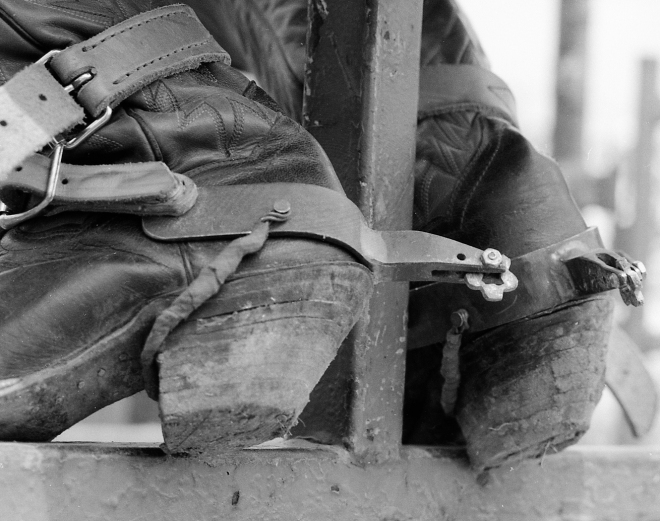 I found this unattributed bit on the interweb, not my words.

Keep this in mind the next time you are about to repeat a rumour or spread gossip.

In ancient Greece (469 – 399 BC), Socrates was widely lauded for his wisdom.
One day a friend ran up to him excitedly and said,
“Socrates, do you know what I just heard about Diogenes?”

“Wait a moment,” Socrates replied, “Before you tell me I’d like you to pass a little test. It’s called the Triple Filter Test.”

“That’s right,” Socrates continued, “Before you talk to me about Diogenes let’s take a moment to filter what you’re going to say. The first filter is Truth……. Have you made absolutely sure that what you are about to say is true?”

“All right,” said Socrates, “So you don’t really know if it’s true or not. Now let’s try the second filter, the filter of Goodness……… Is what you are about to tell me about Diogenes something good?”

“So,” Socrates continued, “You want to tell me something about Diogenes that may be bad, even though you’re not certain it’s true?”

The man shrugged, a little embarrassed. Socrates continued, “You may still pass the test though because there is a third filter, the filter of Usefulness… Is what you want to tell me about Diogenes going to be useful to me?”

“Well,” concluded Socrates, “If what you want to tell me is neither True nor Good nor even Useful, why tell it to me or anyone at all?”

The man was bewildered and ashamed. This is an example of why Socrates was a great philosopher and held in such high esteem.
It also explains why Socrates never found out that Diogenes was shagging his wife.

May 12  A few social comments.

I read today that Drake has bought his own 767 jet , outfitted it lavishly, then invited the press into the hangar to show it off to the world. Why must rappers brag of their wealth and success in such ways, enough gold bling to cause neck cramps, mansions large enough to house a small village, outrageous automobiles and now a fuel-guzzling jet?

I detest rap so I might be biased. I don’t know if Drake ‘raps’ about climate change, but I hope he is not that hypocritical.

More on literacy. I realize that in today’s world some people don’t care about spelling and grammar, but the results can be puzzling. Here is a direct quote from a “social media” site:

Happy Mothers Day. I hope it is a warmer, more pleasant day in your area than it is here today. I’m glad that I completed the yard work yesterday. Now I can finish my garage organize and clean project. Do you get a good feeling when you finish a clean-and-tidy? I tend to brutally discard items that have not been used in recent history.

Of course, in a week or two, I will need that obscure object I tossed out.

May 4  Aural memories are powerful. Like smelling a long-forgotten scent, a sound can be placed in our memory.

A recent radio show played recordings of various devices, inviting listeners to identify the source. The memory factor was quite apparent. Interestingly, young listeners were unfamiliar with dial-up modems. Remember them? How about tractor feed paper printers?

One sound that I picked up was that of a View-Master cycling through the 3D images, triggering memories of viewing travel scenes. Cartoon Disney characters were also popular.

Mechanical sounds, particularly motorcycles, put a smile on my face. Classic motorcycle engines are delightful- singles, parallel and V twins have such great mechanical sounds and I’m not speaking strictly of the exhaust note, although that is obviously the main source.

Those classic engines clattered and rattled, some gear whine can be heard. The sounds in the above link also incorporate some external valve lifters that are mesmerizing to both watch and hear.

One bike, a well-tuned BSA B31 single cylinder, thumps quietly along at such a low rpm you can almost count the revs. Another BSA, the classic and much-desired Gold Star has what I can only call a delicious exhaust and intake roar.

Manufacturers today must diminish engine noise to pass EPA rules- decibel limits are not simply tested at the exhaust, the mechanical sounds are also measured. Liquid cooling is the most obvious change. A  water jacket enclosing the internal mechanics greatly muffles the sound.

Motorcyclists are a fussy group- we want our bikes to look and sound good too. The exhaust note is tuned to be quieter at a lower rpm and raised a bit as the revs rise. At high revs (full-song, the Brits say), the intake of air can also be incorporated. Inline four cylinder engines positively howl. Delightful.

Most stock bikes sound good in a quieter sort of way and the ride is more pleasant. I cannot tolerate riding behind a bike with a very loud aftermarket exhaust. Harley riders seem to be the worst, replacing stock mufflers that, to my ear, have a nice low burble, with bad-boy loud, illegal pipes. Often right from the showroom floor before they accept delivery of the bike. I’m not sure how the dealers get around that.

The results are an obnoxious approach to being a motorcyclist- sit at a red light and constantly rev the engine, piss off the public with straight-pipe noise. It makes me cringe. There are some aftermarket mufflers that are not too loud, but they don’t seem to end up on Harley Davidsons. Not bad enough, I guess. And who needs that catalytic converter anyway?

Even if you aren’t an enthusiast check out the video, it’s worth it just to see some rare vintage machines. The name of each bike appears briefly on the upper left side. See if you can spot the 1930’s liquid-cooled two-stroke engine. Turn up the volume and enjoy the sounds of the past.

May 2  Another sign photo found in the archive, taken at the Aylmer fair. I also found more interesting infra-red film photos along with the sign. I think it’s time to create a separate section of photos from the fair. I had forgotten how many I have.

I’m also looking for another photo of a sign, perhaps the most sarcastic of them all. Sadly, I cannot even find a print to scan. “Patience, Luke, let the force guide you.” Stay tuned.

April 5  I determined from the start that I would avoid two topics here at ECW: politics and religion. I want to keep this an upbeat, fun and thoughtful site to visit.

The interweb is a crazy place at times. It is nearly impossible to avoid those two poisonous topics when perusing the news. The comments are often toxic. Social media has become a shouting war.

Instead of trying to find common ground and therefore make some progress, so-called leaders have embraced the tactic of divide and destroy, turning citizens against one another.

So much anger in the world these days, everybody polarized into separate camps, lobbing insults at the other side. And then there are the usual bores who make everything about politics. I swear that if there were a piece on the making of hockey pucks they would be screaming about “lefties” and “cons.”

Fed up with the crap? You can always find sanctuary at Ever Clever Wilson. I’ll even throw in a joke now and then.

“The human race has one really effective weapon, and that is laughter.”  –Mark Twain