Sept 1  Sweet Autumn clematis are delightful. They blossom in late August and into September. The scent is intoxicating. I transplanted this one (yes, it’s one plant and this is one year’s growth) three years ago. I cut it back to the first bud on the vine each spring.

Whilst most other flowers are fading, my hostas and clematis are just getting going. 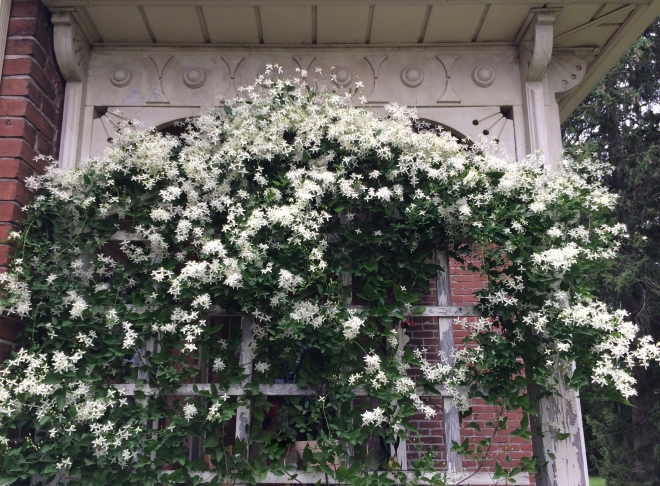 Found: another hosta photo to be considered for editing. It was overlooked in the first review of the images, but I quite like it. See Hosta 3 below.

Aug 24   Editing photos is sometimes difficult, especially in today’s digital world. Back in the days of film, we didn’t take as many frames of a subject as we tend to do today- film and processing were costly.

Here are three photos of my favourite hostas, a very old fragrant variety. I found many names for this one and I don’t really know which mine is. They came from a garden that grew them over fifty years ago. They are late bloomers and need shade to grow- a northern exposure works well for mine. The scent is intoxicating.

Back to editing: I photographed them last evening and narrowed my choice to three images. Now you, the reader, get to choose which one to post in the gallery.  Please use the contact link. 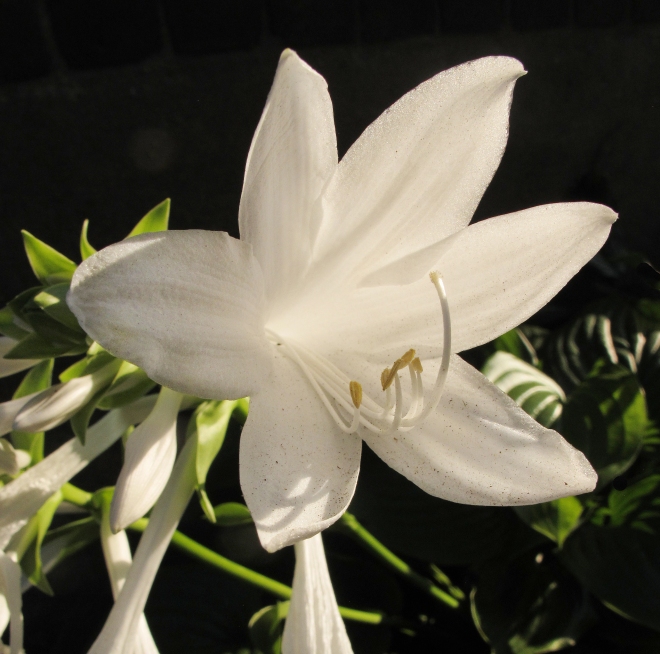 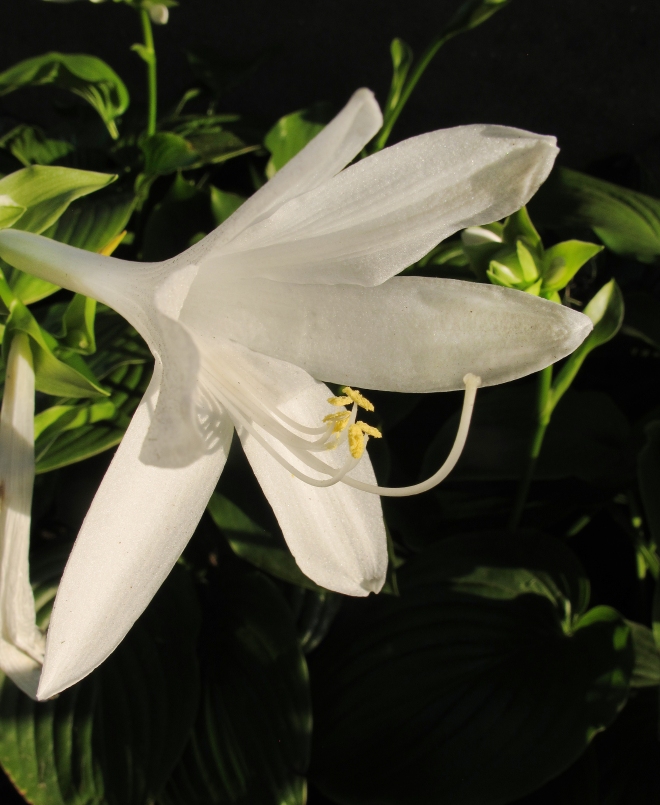 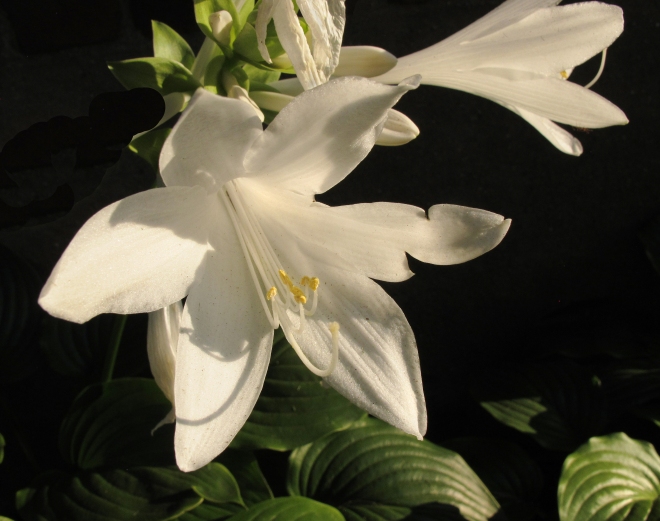 Text exchange with a friend regarding meeting time:

> No time commitment needed. You will be flogged if late

Aug. 21  Quotes. I enjoy finding quotes from the past that are relevant to today. I thought that I might share some with you.

I particularly like this one: “If you tell the truth you don’t have to remember anything.” Mark Twain

“A lie can travel halfway around the world while the truth is putting on it’s shoes.”  Mark Twain  (More relevant today than ever)

“Patriotism is the last refuge of a scoundrel.”  Samuel Johnson

Aug. 9   Re-writing history? I swear that we are collectively losing our minds. Today I read that the city of Victoria is removing a statue of Sir John A, Macdonald from the city hall steps. The latest target for transferring 21st-century guilt to our historic past. I do not talk of political matters here but political correctness has gone too far. The founder of our country has been consigned to the trash heap with no sensitivity to historical perspective. There are no leaders worthy of sainthood- everybody has some dirt in their past and none of us are perfect. Furthermore,  the story writer neglects to use the “Sir” title that Macdonald was granted. So now he’s just another bum from the past?

To the city of Victoria: ship the statue to me, I’ll display it with pride and raise a glass to toast Sir John. I know that he would approve. I like history, warts and all.

Aug. 5  Life sometimes takes me away from here, and I’ve been very busy, but back to normal now. Organising a party for forty people, feeding and entertaining them was a daunting task. It cost me many sleepless hours and I have a great deal of respect now for those who take on the responsibility. I also have gratitude for the friends who helped me. Thanks to Candy, Larry, John, and others.

Reading books has been a lifetime addiction for me, and I’m presently reading an interesting novel. The Water of Life by Daniel Marchildon is a historical novel that takes place in Scotland and on Georgian Bay in Ontario. It begins in 1494 and follows the story of Scotch whisky. It educates in a fine storytelling way, alternating between the old and the modern world.

Aside from the many things I learned about Scotch, historic events I knew nothing of were revealed. The worst Great Lakes storm to date occurred in 1913. Thirty-seven vessels and 244 sailors and passengers were lost. Large lake freighters were broken in half, and captains reported waves at least thirty-five feet in height with the wind often blowing in the opposite direction. Blizzard conditions with snow and ice- it must have been terrifying.

I also learned about global trade creating agricultural problems 150 years ago. The louse phylloxera travelled from America to France and almost ruined the wine industry there. Affected vinyards were forced to uproot the vines and burn them, roots and all. Close to 85% of the vines were lost. Curiously,  American vine rootstocks were imported and  French varieties were grafted onto the phylloxera-resistant US roots.

Global trade also brought the Norway rat to Canada circa 1775 (thanks a lot.) It’s not all bad: dew worms were brought to Canada to enrich gardens and have spread over the country. They’re also good for fishing!

Why then did he change whisky to whiskey? Scratching my head over that one…

July 21   Yay! I have milkweed planted to attract Monarch butterflies. Milkweed is the only plant that keeps them alive- the larva (caterpillar stage) can eat nothing else. I have seen only a few butterflies this year and noted one around the milkweeds a while back. Today a friend with sharp eyesight spotted this delightful site: a Monarch caterpillar.

I will be watching closely for more. There was a time not too very long ago when it was common to see dozens of Monarchs around the farm. During the fall migration hundreds could cover a tree or shrub to rest for the night. Perhaps those days are gone forever but, given our help, we will hopefully build up a sustainable population.

I love jokes. This one came from a fellow motorcyclist:

Son: Dad, please buy me a motorbike for my birthday.

Father: No son, I’d rather buy you a violin.

Father: Son, it’s better to be a musician than a biker.

Son: OK then, give me the violin if you insist.

After a long while and many music lessons, the father asks: ” Son, show me what you’ve learnt thus far.”

July 13   Friday the 13th and the ever-growing Port Dover gathering happens again. When asked if I would be going (I have ridden motorcycles for 50+ years) I replied in the negative.

“No,” I replied, “I’m a motorcyclist, not a biker, plus I can’t take crowds of people, particularly fat old guys who dress like pirates and ride obnoxiously loud bikes.”

Am I a bit harsh? Anyway, I hope the faithful have a good time and don’t go deaf too soon.

July 10  Rainfall can be a fickle teaser in this area of eastern Elgin County, the Norfolk Sand Plain, rich sandy/loam in the Carolinian Zone.

In the post-tobacco era growers here adapted and now produce the most diverse variety of crops grown in Canada. In addition to the traditional corn/ wheat/ barley/ apple/ peach/ oats/ soybean/ dairy/ poultry/ pork/ beef mix, a diverse variety of vegetables and fruit are now grown. From bok choy to hops, peppers to shrimp.

Seriously, an indoor shrimp farm in one of the former Imperial Tobacco buildings along with Weed MD, a cannabis producer. Craft brewers, goat milk yogurt, ginseng and much more are produced.

Large producers such as Dr Oetker have taken note and located locally to take advantage of the availability of fresh produce and grains.

Of course, nothing grows without water and rainfall has been scarce here lately. A moraine ridge approximately 20 km north of Lake Erie creates a ‘rain shadow’ here. I say “it’s raining north of Lyons” with a fair degree of accuracy when distant thunder sounds and dark clouds roll eastward like a sulky temptress, teasing us to the north. So near and yet so far.

This is the result of drought: corn that looks like a crop of bayonets leaves curled to protect them from the relentless sun. 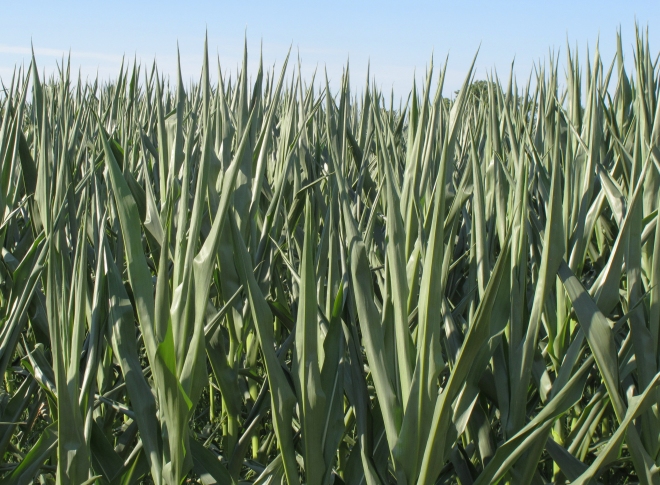 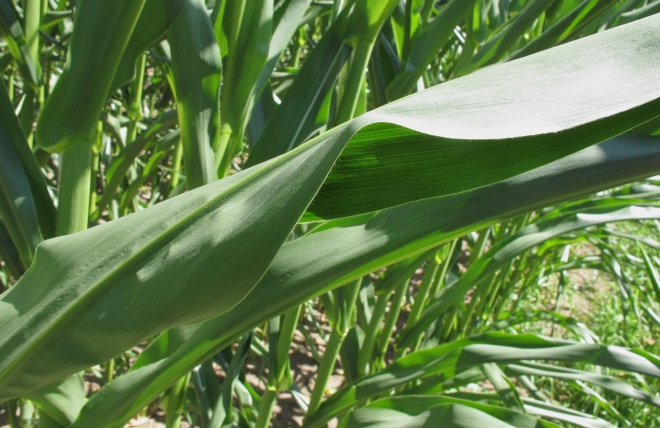 Notice how the leaf presents the lighter underside to the sun, better to reflect powerful rays and shrink the surface area. Soybeans also ‘turn over’ their leaves in the heat of the day and I have noticed some maple trees do the same in an extended drought. Nature can be resilient, to a point.

Speaking of nature’s resilience, I posted a photo of the snowball shrub totally stripped by the dreaded viburnum beetle on June 2(see the April- June posts) It has since recovered and produced new leaves. When I first noticed the new growth I watered it daily. Here it is in a new wardrobe. 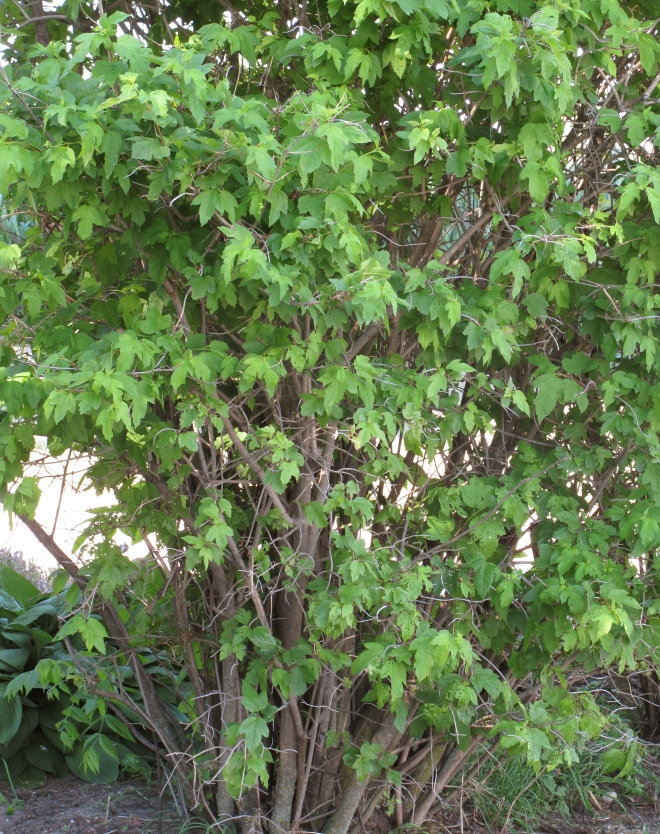 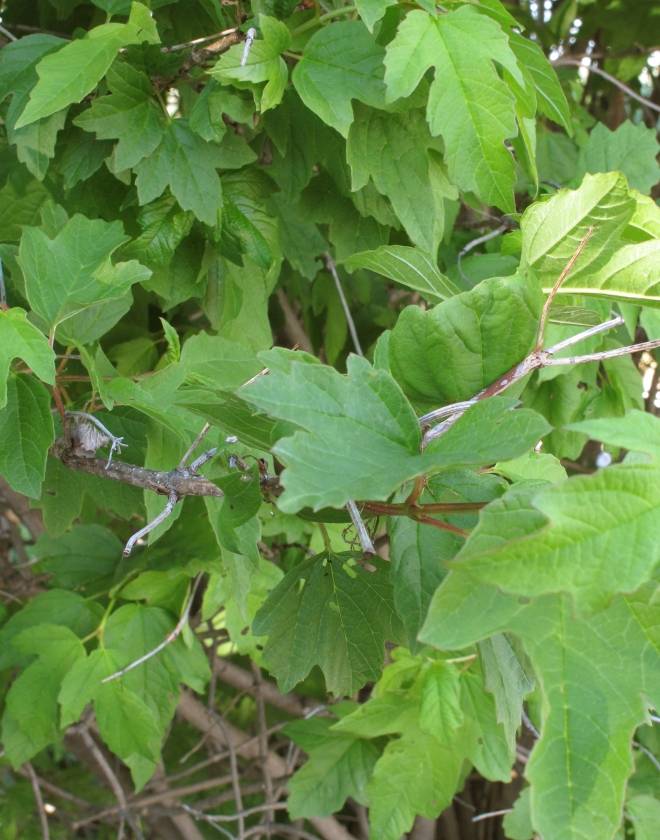 Although it looks healthy, the eggs laid in the deadwood of the shrub will hatch and the caterpillars will attack again next year.

Update  July 12 The viburnum are back and are once again devouring the leaves. Sigh…